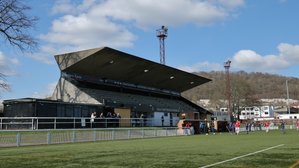 Star’s four game unbeaten run came to an end after a disappointing display at Netherdale saw them lose by the odd goal in five.

In a strange game the home side should have been well out of sight as they somehow managed to miss more than half a dozen one on ones with Star stopper Vinnie Parker , but a combination of excellent goalkeeping and some poor finishing meant they missed the lot. As a result Star remained in match in which they should have been dead and buried and when Corey Thomson equalised with less than 20 minutes remaining you felt they might snatch the most unlikeliest of victories.
Star lined up with three enforced changes due to Ross Thomson and Connor Graham being unavailable and Ben Irving being suspended. They began slowly and there was an end of season feel to their play. However the home side were well up for the match and they twice went very close before they opened the scoring in the 7th minute. Star failed to deal with an inswinging corner and the ball fell perfectly for defender Pat Scullion and he thumped the ball home from close range. Star eventually worked their way into the match and in general play the match was pretty even, but it was alarming the number of times the home attack broke clear of the Star defence and striker Ruari Paton should really have scored at least twice as many goals as he did. Phil Addison is another attacker Star know well from previous meetings with Gala and Selkirk and though he caused Star numerous problems, they were thankful he left his shooting boots at home.
Three minutes from the break home keeper Patrick Martin was called into serious action for the first time when Scott Milligan skipped past a couple of challenges, cut inside on to his right foot but his curling effort was well held. A minute later and Rovers lead was doubled when Addison’s cross from the left found Paton all on his own in the penalty area and his header gave Parker no chance. Within seconds Star got themselves right back into the match when good combination play between Liam Park and Lewis Sloan set up Milligan and he played in a teasing cross to the back post where Lewis Todd ghosted in between two defenders to stab the ball home. The goal came at a price though and Toddy picked up an injury in an accidental collision with home keeper Martin and he would not re-appear for the second half.
Star continued to compete well but without doing anything out of the ordinary the Gala attack continued to cut through the Star rearguard like a hot knife through butter, but thankfully they continued to miss. This is not a criticism of the back four as defensive responsibility lies with the whole team, and as a team we did not defend well enough. However in the 71st minute a straightforward pass put Corey Thomson through and though his strike was the most sweetly struck it was accurate enough to sneak past Martin and nestle into the back of the net. Star could now sense the points were there for the taking but within five minutes the home side were back in front. As Star pressed for a winner they were caught on the break and Paton was again the man who did the damage with another close range header that flew past Parker.
Star did all they could to find a leveller but other than a Liam Park drive that was saved by the knee of Martin from a tight angle they never really came close and the home side held out for a deserved three points. Next up is the final league match of the season as Vale of Leithen visit Islecroft and it would be good to end a disappointing season overall, with another good home performance and three points.
GALA FAIRYDEAN ROVERS 3 DALBEATTIE STAR 2
Scullion (7) Todd (44)
Paton (43, 76) Thomson (71)
HT 2-1
GALA FAIRYDEAN ROVERS: Martin, Ainslie, Patterson, Scullion, Miller, Smith, Baxter, Taylor-MacKenzie, Paton, Cunningham (Green 37), Addison (Bell 90)
Subs not used: Shanks, Robertson,
Yellow Cards: None
DALBEATTIE STAR: Parker, Wilson, O’Sullivan (McConaghie 84), Cowie, Wells, Cameron, Park, Todd (C Thomson 46), Miliigan, Sloan, Mason (Kerr 69)
Subs not used: Green, Pipe, Maxwell
Yellow Cards: None
Share via
FacebookTwitter
https://www.pitchero.com/clubs
Recent news