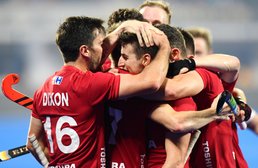 Sponsored
By Pitch Hero
7 May 2019
Share via
FacebookTwitter
https://www.pitchero.com/clubs

Five months after getting underway, the ground-breaking FIH Pro League has debuted in London.

Giving hockey fans the opportunity to cheer on Great Britain’s men and women on home turf. With 13 matches taking place at the Lee Valley Hockey and Tennis Centre, ahead of the two final home matches at The Twickenham Stoop, this is a great opportunity for sports fans to see some of our Olympic Champions in action and enjoy a great day – or evening – out!

The fast tempo and quality of the play on the pitch has already been getting fans up out of their seats as the FIH Pro League offers a fantastic opportunity for everyone to get really close to the action. The atmosphere around the stadium during GB’s women’s opening game against the US when it went to a penalty shoot-out (GB won!) was electric. This is one of the best opportunities you’ll have to the greatest teams in the world in action, up close and personal. You might even meet the players at the end of the match and get to play on the hallowed turf.

So whether you want to make a night of it with friends during the week, or get your whole family along at the weekend, there’s more on offer at the FIH Pro League matches than just the hockey. With a number of games already sold out, and tickets selling fast, make sure you buy your tickets now.