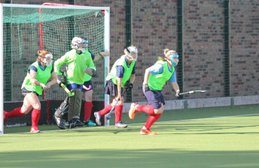 Draw to kick off the first league match

We suffered an early injury when Susan received the second ball to the head in 3 weeks; fortunately she seemed alright but certainly not well enough to rejoin the game. We gave ourselves the lead mid-first half with a top-of-the-D straight strike from Kate, which was leveled just on half time by Stokesley. The team had to deal with some very challenging umpiring decisions, and everyone fought hard when one of our players was given the green card.
2nd half saw us down to 10 players due to another injury (Bethany got a stick to her right hand) but we fought hard and pulled together to score again on the break, this time the goal coming from Meg. With 12 minutes to go we weren't able to keep them out of the D and conceded a (to be fair, lovely) reverse raised shot.
Fortunately we kept the scoreline level but the game was very frustrating - a much better second half though where we pulled together, really fought for the win, and communicated better. Plenty of work to do, but some really positive things to come out of the game too.

Player of the match went to Rachael for keeping a cool head when the decisions were all going against her
And happy birthday to our super-keeper Milly!