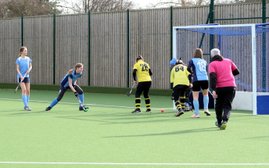 Ladies 2s back to winning form against Redcar

A must-win game for us to keep our top-3 finish aspiration alive.

We started off slowly, and let Redcar take the game to us more than we should have. About 20mins through the first half they had a blood injury so were down to 10, with our medical expert Lauren assisting on the sideline (despite just finishing night shift at the hospital!). We weren't able to capitalise on that advantage until just before half time with a goal from one of juniors, Katherine.

After stressing the need for more urgency and hunger at half time, we were able to tire out the opposition, making use of the space. Even when they were back up to full squad we were able to keep on the pressure and goals from Bethany, another junior Elise, Dr Lauren, Kate and 2 from Rachael (hitting the post to prevent her hat trick!).

Overall the result we wanted despite it being scrappy at times. Just 2 games of the season left!