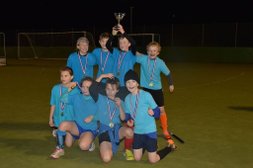 Dart Hockey Club is delighted to have hosted another highly successful Primary Schools Hockey League!
This year we welcomed 12 teams to the league - from Broadhempston, Berry Pomeroy, South Brent, Dartington, Diptford, The Grove, Ipplepen and Canada Hill Primary Schools – who played 16 games of hockey each over the 5 week period.
Prior to the league starting, our coaches delivered after school training sessions to the children. For some children, this was the first time they had picked up a hockey stick – imagine how rewarding this was for the coaches to then see them playing matches each week , growing in confidence and improving their skills!
After week 3 the league was split into the Cup competition (for the top half of the table), and the Plate (for the lower half of the table). The scores were set to zero and the competition really got tough! The deciding game between South Brent A and Broadhempston A in the Cup competition was a hard fought affair, with South Brent A coming away as champions and Broadhempston A as worthy runners up.
In the Plate competition, it was The grove B who were victorious, with Broadhempston B as runners up.
This has been a fantastic event, where Dart Hockey Club has been able to share its passion for the sport with nearly 120 children from the local primary schools. We hope to see many of them at our club training from January onwards. Dart Hockey Club’s Junior section trains on Monday evenings from 6-7.15 at the KEVICCS astro. We are an all inclusive, family-oriented, friendly club and we welcome children of all abilities from 8 years up.
Share via
FacebookTwitter
https://www.pitchero.com/clubs
Recent news