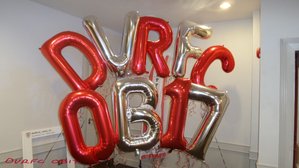 On Saturday 20th May 2017 Dartford Valley RFC headed to the Brands Hatch Mercure Hotel for their end of season presentation evening of celebrations. We were treated to a lovely 3 course meal at the same time being entertained by the amazing Chris Till singing whilst we ate.

Club Chairman Peter Timon then got up to say a few words about the club, how far we have come and thanking our sponsors and all the volunteers that commit their time to keep the club running for all ages.

Dartford Borough Council Leader Jeremy Kite then got up to say a few words about how proud he was of the club and what we have achieved along with the progress update regarding the new club house.

Bramwell Martin (Club President) and the Mayor of Dartford then took to the main stage to hand out the awards.

We then heard a little northern voice come from the speakers and Chris Burke (head coach) then appeared on the projector all the way from Kenya whist serving with the Army to give his 1st XV player of the year and most improved.
1st XV Player of the year - Danny Clive
1st XV Most improved player - Lee Policelli

A huge well done to those who won awards and to those that didn't you all play a huge roll in making this club great.

After the awards we had the raffle and auction which saw the highest selling DVRFC shirt of all time. £205 for a DVRFC shirt signed by the Saracens team. Jonathon O'Connor was the lucky winner of this.

Now it was time to sit back, relax and drink some more as the DJ Brad Voak (DVRFC player) took control of the evening with a great set keeping everyone up dancing until the early hours of Sunday morning.

Thank you to everyone that attended and those involved in setting up the event from start to finish. We have a great club filled with great people.