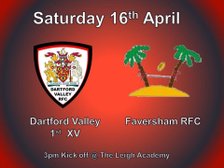 This Saturday Dartford Valley 1st XV take on Faversham for the battle of 8th in the league.

This is both teams penultimate game, both on the same points Faversham ahead on point difference. This will be one battle you don't want to miss. The last time both teams met back in December at Faversham the game finished at a draw 21-21.

It is also the Final home game of the season so get along to the Leigh Academy this Saturday Kick off 3pm the players will be out warming up from 2:15pm onwards. Get along to show your support. Lets finish the season with 2 big wins. Come on Dartford!!!!!