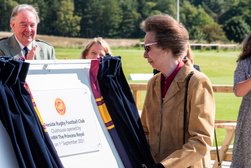 DRFC was delighted to welcome HRH The Princess Royal to Woodend where she officially opened the new clubhouse.

At a time when most clubs are simply seeking to stay afloat after the unwelcome visitation of Covid-19, Deeside Rugby is looking to the future, underlining its commitment to its many members of all age groups who enjoy the facilities at Woodend, Banchory.

On Wednesday, 1 September 2021 our forward-looking club had the privilege of having HRH The Princess Royal officially open our new clubhouse. The clubhouse has been built over the past year in a start/stop process during the pandemic lockdowns.

There are over 250 playing members waiting to make use of the new facility, which nicely complements the splendid playing area with an equally splendid view of Deeside as an added extra. There are also some 50 plus coaches and non-members, all queuing up to gain entry as the 2021/22 season gets underway on Saturday, 4 September, three days after the official opening. The days of standing in the wind and rain for after match catering are now long gone.

Deeside Rugby has come a long way since its formation as Aboyne Rugby Club in 1977. From that inauspicious beginning at Aboyne Green, the club is set to enter a new era, which will hopefully see the senior team progress beyond its current position in Caledonia League 4 North, while ensuring our youth teams are equally progressive.

Trustee and former president, Ian Finlayson was keen the club should continue to enhance the facilities and said: "We were ambitious right from the time we moved onto the new pitches here in Banchory 10 years ago, having moved from multiple sites in Aboyne and Banchory where the facilities were no longer fulfilling our needs and e have made stunning progress at a ground leased to us from the Leys Estate. The process is never ending, but the clubhouse was always a main aim for us. It is a major £175,000 investment, representing a huge leap into the future."

In the intervening years, full floodlights have been installed, a community trim trail built round the pitch and a new kit shed opened by Hollie Davidson a former student at Aboyne Academy who is now a SRU referee.

Mr Finlayson was proud that HRH The Princess Royal had agreed to open the new facility. "We are thrilled to have her officially open the clubhouse, especially given her connection with the area and of course her position as Patron to Scottish Rugby," he said.

The sun shone on the day, and she was welcomed on site by Mr Alastair McPhie, The Lord Lieutenant and presented to a welcoming party of club officials. She was escorted by Ian Finlayson onto the main pitch to speak with coaches and players that had been performing demonstrations from the Mini/Micro section and Tartan Touch group and then to other club coaches. She then proceeded to the clubhouse itself where she met a large number of members and major funders of the project. The group included past club captain, John Low, the father of Deeside Rugby’s first Scottish international player – Moray Low and his first coach on Aboyne Green, past president Colin Cashmore, who said he remembered Moray as a scrum half not as a prop forward.

HRH The Princess Royal was then invited to unveil a plaque to commemorate the occasion and was presented with a bouquet of flowers by the club’s retiring safeguarding officer, Mrs Lizzie Finlayson. The bouquet was kindly donated by Mark Paterson, the curator at Cruickshank Botanic Garden and included some sprigs of the cultivar Torramhor lavender, which was the specific lavender grown on the field that is now the main pitch, in the days when Banchory had a thriving commercial lavender farm and factory.

On leaving, HRH The Princess Royal was played out by the Deeside Rugby pipers. A great day for all involved and we now look forward to making full use of the new clubhouse both for the club’s own activities and also for other community users.

To conclude the day, John Low presented the club with one of Moray’s international jerseys to go in the clubhouse.

More photographs from our royal visit can be seen in the photos section of the website.