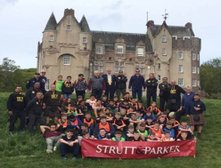 An action packed weekend with our French visitors from Martignas.

A splendid action packed weekend with our French visitors from Martignas. A bit of juggling of the schedule was required on Friday due to their late arrival because of an air traffic control strike in France. One of the French coaches is an air traffic controller but was staying very quiet! The only downside was that we lost the game, but made up for it by winning the tug of war!

The picture at Kincardine Castle shows the group with Aberdeenshire Provost Howatson and Mayor Seyve from St Jean d’Illac the neighbouring village. The invitation from Herve Seyve for us to go there next year has already been made.

Many thanks to Gregor and his team of organisers and all the home hosts for making the weekend such a success. I hope you all enjoyed it as much as the hall keeper at Torphins, who said it was the best ceilidh he’s had in the Learney Hall for years!

An event that is now firmly in the Club calendar and something all U14/15s should be looking forward to. As a Club we need to ensure it is in our fundraising plan each year