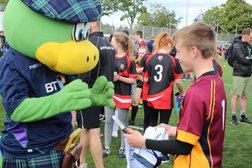 Tartan Touch with the Scotland Squad

A brillant day at Highland Rugby Club on 18 June.

Due to the great success Tartan Touch has been at Deeside Rugby Club the SRU, in recognition of this, kindly invited a contingent of the Club’s school children along to the Tartan Touch event at Highland Rugby Club (Inverness) on Tuesday, 18 June 2019. This was no ordinary touch rugby event though as none other than the whole Scotland rugby squad were in attendance.

On the day a mixture of 4 girls and 11 boys from Deeside Rugby Club’s U13, U14 and U15 age groups attended, along with a handful of parents.

On arrival everyone was able to witness the Scotland squad undertake their first training session after a 3-week break/holiday. This was led by Gregor Townsend and his fellow coaches. Highland RFC’s new state-of-the-art clubhouse gave an amazing elevated view of this, with all the kid’s able to see their idols in action on the artificial pitch/ training area. Virtually the whole of the Scotland squad was on show, although Finn Russell didn’t participate in the training (he was still meant to be on holiday) and had to depart early to catch a flight back to France.

Whilst the Scotland squad did their post training debrief and showered, the Tartan Touch games got under way with just over 150 players participating. Each game was 10 minutes long with no scoring registered. The games were fast flowing, played in good spirits, and competitive. During the fifth game the Scotland players reappeared, with some of them taking part in the touch rugby games. Jonny Gray made a guest appearance for Deeside, but unfortunately wasn’t up to the high skill levels and speed of his younger new teammates so was substituted into the opposing team. After a further game the Tartan Rugby session was concluded and everyone went to personally meet the Scotland players and have their photos taken with them and/ or to get their autograph. The interaction between the Scotland players and their young proteges was excellent, with much advice and encouragement provided. After about an hour of mingling the Scotland players had to depart to catch their team coach home, but they left behind a very happy group of aspiring young rugby players.

A brilliant day was had by all (including parents).

A selection of photos from the day can be found in the Photos area of DRFC website.