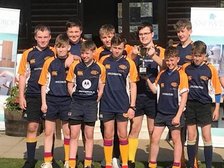 Deeside Rugby Club’s Under 14 age group 7-aside team turned in a fantastic performance on Saturday, 20 April and came out on top in the Easter heatwave to win the Lathallan School 7s tournament. Having reached the final in each of the four previous 7-aside tournaments they have attended at various rugby clubs, at last they went the full distance and won their age group and took home the silverware.

The 6 Deeside players were joined by 4 players from Garioch RFC, who Deeside RFC have an alliance with. The team were given a difficult pool with Mackie RFC, Robert Gordon’s School and Carnoustie RFC, but they won all their pool games and then were facing Strathmore Sharks RFC in the final.

Deeside played excellent free flowing 7s rugby in the final, maximising their pace and strength out wide with the on form Callum Blackhall getting over for a hat-trick of tries and Hamish Smart also getting on the score sheet in the final. Connel Burgess was man of the match in the final with the other Deeside players, Murray Fraser, Brodie Macgruer and Callum Williamson all playing key roles in securing an excellent tournament win.

The Deeside Under 14s team and coaches now look forward to hosting a visiting Under 14 team of boys and girls from Martignas in France on the weekend of 11 and 12 May 2019. “Le Grande Weekend” will involve two international rugby matches between Deeside and Martignas and all sorts of other events such as a Ceilidh and Stovies, mini Highland Games at Kincardine Castle, Pipe Band Championships and watersports at Knockburn Loch kindly supported by Bert McIntosh. Anyone wanting to help support or sponsor the weekend or events please contact Gregor Scott on membership@deeside-rfc.co.uk.