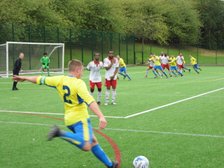 Bad Day at the Office for United

United travelled to Division 1 leaders Burngreave FC to play this 1st round League Cup tie on a plastic pitch. For 35 minutes the game was even, indeed United had the best effort when Louis McKie got on the end of a free kick but his header looped over the crossbar. Around the 35 minute mark two blows in as many minutes put the skids under United's efforts, firstly Paul Mills came off injured then keeper Kyle Matthews was shown a straight red after he raced out from goal and took down a home striker moving towards goal. United will argue that covering defenders stopped it being a clear goal scoring opportunity but the referee was having none of it and sent Matthews from the field, Brad Turner taking the gloves. United players felt aggrieved at this as Burngreave might have been down to 10 men themselves before that incident when Silas Collins was the victim of what appeared to be a 2 footed challenge but the referee did not agree.

United felt further aggrieved with the antics of some players from the home team, seeing a number of dramatic dives when no contact had been made causing our players to become extremely frustrated as the referee declined to take any action to stamp it out. The home side took the lead just before the break with a move down the right and though United then managed to look solid and create a number of shooting opportunities from the 60 minutes mark the wheels fell off their efforts as Burngreave got on top looked like scoring every time they moved forward as United collapsed, and score they did, a further 7 times to make it a miserable afternoon.