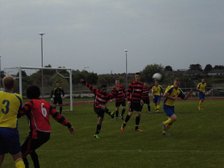 United courted both good luck and misfortune in a hard fought victory at the Keepmoat Athletics stadium. In a very good opening 20 minutes the Reds had 2 goals disallowed, Martin Lawton put the ball in the goal after it was pulled back to him by Adam Winfield on the goal line but saw his effort ruled out after the referee deemed the ball had gone out for a corner even though this was not indicated by the linesman. Not long after Steve Ellor had the ball in the net after Bawtry failed to clear a corner but this was also disallowed, this time for offside. Adam Winfield then forced the Town goal keeper into a great save before the Reds deservedly went ahead after 17 minutes, a corner from the left was headed down by Ryan Scott into a crowded goal area and Mick Russon was first to pounce to strike the ball home. United almost scored immediately at the restart but the Bawtry keeper Jepson produced a fine save. The Reds continued to threaten with Ellor being foiled by a point blank stop from the keeper and seeing the goalkeeper then divert a rasping shot onto the bar and out for a corner. At this stage United were well on top and limiting Bawtry to spasmodic attacks but things started to go wrong at the half hour mark, United lost cheap possession at their own free kick, the ball was played through and though Reds keeper Ben Priestley was favourite to get the ball he allowed the ball to get past him, a Bawtry player then got a shot at goal which was blocked on the line but the rebound fell kindly for them and it was swept home at the 2nd attempt by striker Shah. Five minutes later United went behind when a free kick from 25 yards by Minshall sailed over the defensive wall and though keeper Priestley got a hand to the ball it still entered the net to give the home side the lead. A couple of minutes later United went 3-1 down when a through ball dissected the defence and Harper stroked it into the net giving the keeper no chance.

This setback seemed to affect United considerably and they started to allow the home side to set the tempo though Bawtry were fortunate not to have a player sent off when Mick Russon was pushed in the face, the referee seeing the offence and giving a free kick. At this stage Bawtry created a series of chances though thankfully didn’t add to their tally. Neil Spruce came on at half time for Martin Lawton and looked industrious from his first touch though the Reds were still looking suspect at the back with Bawtry having numerous attempts at goal with shots either being missed or saved by keeper Priestley who looked to have regained his confidence after the error for the first goal. With Bawtry on top and playing some decent stuff they were also quite physical with the referee penalising them for some robust challenges but surprisingly allowing them to go unpunished as far as any cards were concerned. Indeed Mick Russon was cautioned for dissent after complaining bitterly about a challenge on him that went unpunished. Spruce saw yet another goal disallowed for the Reds before they reduced the arrears on 75 minutes. A ball played in the air just outside the area fell for Ainsley Finney and he hit a sweet shot into the right side of goal to make the score 3-2.

Still Bawtry had chances and Ben Priestly jumped high to claim an attempted lob over his head and further shots went wide but United drew level on 84 minutes, Spruce who had impressed since coming on as a sub floated in a free kick from the left, Paul Mills headed it down to Liam Winfield who fired it home to level the scores. Just a couple of minutes later United got a winner, Steve Ellor was put through and he put in a rasping drive which rattled the crossbar and it rebounded out to Spruce who crouched down to head the ball into the net for a dramatic fourth goal. The Reds then looked for a fifth as Ellor again got a clear run on goal but was brought down and was aghast as the referee didn’t even give a free kick never mind the red card the challenge deserved however the referee then blew for time as United got their first victory of the season.