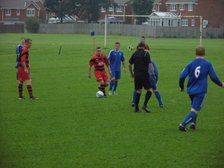 Late late Show from The Reds

United grabbed all 3 points from a disappointing home performance against Frecheville in a game where too many of the team had an off day. The match started brightly for the Reds, an Ainsley Finney shot was blocked and the ball fell for Steve Ellor who, off balance, could only toe poke it wide for a goal kick. Ellor then latched onto a forward ball from Ashley Cantrill but forced wide by the out coming goalkeeper his attempt to try and find a team mate in the penalty area was cleared by the Frecheville defence. United then thought they had taken the lead on 10 minutes when Ellor again got clear from a Cantrill pass and put the ball away with a rasping shot but it was disallowed for offside. Frecheville had their first effort when Josh Barringham got his head to a cross but his header went wide. United had a scare when keeper Ben Priestley was barged as he tried to catch a cross into the penalty area, he dropped the ball and United were aghast as the referee deemed it no foul and the Reds cleared through Tony Mullen.

United's bright start began to diminish as passes went astray and challenges were missed, allowing the visiting striker, Barringham to became more of a threat. He showed he could hold the ball up to wait for colleagues to join him but he was also able to get in a couple of shots at goal, he was beginning to be the fulcrum of the Frecheville forward play. Reds keeper Priestley then allowed a lob to slip through his hands with the visitors Reece Taylor first to it but his touch put the ball out for a goal kick. United responded when a long cross field pass from Finney for Ellor out on the left was then driven across the area but the ball was slightly behind Ben Parker and Frecheville were able to clear. Barringham was still proving a handful and he was forced wide by Paul Mills as he got a shot in from a tight angle which Reds keeper Priestley got firmly behind. The final chance came when the visitors Jamie Buxton got in a challenging cross but United cleared the danger. Half time United 0-0 Frecheville Res

United again started brightly, Finney went on a surging run in the opening minute of the second period before being brought down, unfortunately his free kick went way over the top of the bar. United's best attacks were coming down the right where Ashley Cantrill was putting in a decent performance, unfortunately too many of the other players were repeating their disappointing performances from the first half. Debutant Tommy Harrison, back at the club after a year away played in Ben Parker but his cross was cleared, Parker also got a header on goal but this was easily saved by Keeper Darryl Johnson. Balls played to the United strikers were becoming a little desperate with too much pace on many off them as the ball just raced through to the goal keeper though a Ross Petty header from a corner needed a brave catch by keeper Johnson under pressure.

United's best chance came on 67 minutes when Ben Parker raced clear and with only the keeper to beat his shot hit the goalies legs and rebounded to safety when perhaps the better option would have been to square it to Ellor alongside him who would have had an empty net to tap the ball into. By this stage United's didn't look like winners, they seemed lethargic and while they had territorial advantage they only forced one real save from the visiting keeper. United then began to look a little better with the introduction of sub Jack Whittaker, and he showed a case for inclusion at the start of the next game with a couple of forceful forays before he produced the pass for a late United winner as the match was heading in to stoppage time. Whittaker took possession and surged down the left beating his marker before passing the ball across the area where striker Steve Ellor was handily placed to stroke the ball home to give the Reds victory and break the hearts of a gamely visiting team. Full time United 1-0 Frecheville CAFC Res