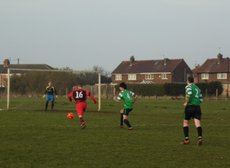 United were comfortable 5-1 victors but they found it heavy going against Bawtry Town.

Playing their first league game for 11 weeks and facing opposition who could only muster 10 players, United found it hard to strike any rhythm though they thankfully still won all 3 points. Perhaps it was a sign of things to come when, on 4 minutes Ainsley Finney skied the ball over the bar for a glaring miss from only 3 yards after meeting a cross from Steve Ellor. United followed this when a long threaded pass from Ben Redfern carried just a little too much pace on the ball as the ball carried through to the visiting goal keeper Wilkinson as Paul Hemmingway looked to get free. United were certainly having territorial advantage but were not threatening the Bawtry goal too often as their forays forward lacked any urgency or pace, Redfern did dance his way past a couple of players at the edge of the penalty area, his pirouette giving him space to fire a shot but his effort went wide.

Ellor and Hemmingway each had wayward efforts as United failed to suggest they might score, indeed they might have gone behind when a quick break for Bawtry saw Takrem Shah get clear but his shot went wide and then a slip by Ryan Scott allowed the same player to get clear again and United had a let off as his shot went past Ben Priestleys left post with the visitors appealing for a penalty as Paul Mills put in a tackle as Shah got his shot away. Redfern then had a shot blocked which took a deflection but bounced kindly for keeper Luke Wilkinson to gather. A Jack Whittaker shot went wide and Mills got a header in from a corner which just went the wrong side of the post before United took the lead on 30 minutes, Hemmingway played a defence splitting pass for Ellor, he rounded the keeper and put the ball into an empty net. If anyone thought that taking the lead would liven up the Reds then they were mistaken, a forceful run from Whittaker down the left saw his cross into empty space with no United players looking at meeting the cross. Some good interlinking play between Shah and Liam White saw a good shot from Shah fizz past the post as Bawtry made light work of being one man short, on 39 minutes the visitors really ought to have equalised, Shah having a good game out on the right got a shot in which Priestly saved but the ball fell invitingly for Jermaine Green but he somehow missed any connection and United were able to clear. United finished the half with a Redfern shot from a Finney cross which failed to trouble the keeper. HT United 1-0 Bawtry Town

United started the second period in much the same way as they had played the first, very lethargic in their play, a cross from Green was missed by Priestley but thankfully for the Reds Shah put his shot wide, Tony Mullen perhaps United's best player was called upon to make a number of saving tackles to stop the visitors from being more threatening than they were already. The Reds followed this scare with shots from Redfern, Ellor and Finney but none of them threatened the visitors goal. On 57 minutes United got themselves a little breathing space with a second goal, Redfern played in Ellor on the left side of the penalty area and he made no mistake placing the ball to the keepers left and into the net for his second goal. Three minutes later it was 3-0 and the points looking safe, Tommy Harrison swept over a long pass to the left which actually hit Ben Redfern on the back and for a brief moment it seemed that the momentum of this attack had been lost however Redfern controlled the ball played in Ellor who scored to bag his, and United's 3rd. After getting the ball from Grant Hill, Ainsley Finney then put in a teasing cross and a stooping header from Ellor was saved by the keeper. On 69 minutes the game was definitely won when Redfern scored a 4th for the Reds, some good passing between Harrison and Finney saw Ellor pull the ball back from the goal line and Redfern was on hand to slide the ball home with his instep. A 5th goal was not long in coming as Redfern, Ellor and Spruce all worked together before the ball was played to Finney and he placed the ball into goal from the edge of the penalty area.

Bawtry scored a consolation goal with 8 minutes remaining when Green latched on to a threaded pass with United appealing for offside , he rounded Keeper Priestley and slotted the ball into an empty net. The game then frittered away the remaining minutes but not before keeper Priestley was called upon to make a superb one handed save diving to his left to stop a Jermaine Green shot.
Final Score United 5-1 Bawtry Town

As comfortable as the score line was this was a disappointing performance from the Reds, even more so when you consider they were playing against 10 men, their attacking play lacked pace and urgency and such a display will not get them any points against the better sides.