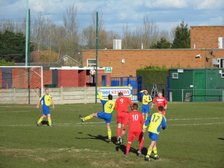 United took the points when sub Finney put in a vicious left wing cross that forced an own goal to give United a late 3-2 win then from the kick off put in a reckless challenge and deservedly got him self sent off, indeed he had talked himself into trouble soon after coming on for a yellow card when he couldn't keep his mouth shut when castigating the referee.

The game started so well for the Reds when Paul Hemmingway latched on to a Jack Whittaker pass inside 30 seconds and despite calls for offside he kept calm and despatched the ball past keeper Wragg and into the net to give United the lead. United continued to press in the early stages and a corner from Ben Redfern caused trouble in the home defence before they cleared and broke quickly down the right, the ball reached Tim Pitt but Reds keeper Ben Priestley saved his shot low down. A Redfern cross from the left was bravely gathered by home keeper Wragg at the feet of Hemmingway. Priestley was again called into action as he gathered a stinging shot from Pitt who had raced onto a long ball from Senior. Whittaker was again involved in a good attack from United, he moved down the right passed the ball to Hemmingway and the United striker fired in a rasping cross from the goal line which the keeper was happy to turn over the bar. A missed header from Mark Gedney in the United back line gave Beedham an opportunity but he blazed well over, moments later after giving the ball away cheaply at their own throw in United again had a let off when Pitt got clear but his shot was saved by Priestly at the second attempt. United were putting a number of promising efforts towards the home goal as Tommy Harrison and Paul Hemmingway both put in shots though the hosts were also looking dangerous after efforts at goal from Pitt & Beedham as well as some good play from the impressive duo Cabaye & Youseff.

On 32 minutes the home side drew level, Cabaye played the ball to Grayson on the right of the penalty area, with Priestley covering the near post the ball was lobbed over his head where an unmarked Beedham was able to head into an empty net. Hemmingway then got clear as United looked to retake the lead but was harshly judged to be offside. The equaliser from the hosts started to lift them and they began to boss the game with some neat passing while the Reds were guilty of conceding possession too easily. Priestley foolishly rushed out of his goal when Ryan Scott was looking to clear and almost gave the ball away though he made up for this moments later when he put in a block tackle with his feet to stop Pitt from getting a shot away. Half Time Parkgate Res 1-1 United

The start of the second half saw the hosts take the lead, a lucky ricochet off Scott saw Pitt rifle in a shot which Priestley saved, again United lost possession cheaply and Cabaye about 30 yards out on the left curled the ball over the head of United keeper Priestley and inside the far post. United responded to going behind when Ben Redfern fed Paul Hemmingway down the left, with United players in space and racing towards goal Hemmingways pass into the centre lacked accuracy and Parkgate were able to clear. A 25 yard free kick from Cooper went straight to Priestley as the home side began to boss the game and were looking to increase their advantage, Pitt chested a ball down from a Grayson cross and Beedham was on hand to fire in a shot which just went over. They followed that with a Cabaye flick from a corner which required Luke Skelton to head out from under the bar and the impressive Youseff twisted inside a couple of United defenders before his shot went across the goal area with nobody on hand to put the ball into the net. Uniteds forays forward were sporadic and efforts from Hemmingway, Whittaker and a Redfern corner all failed to trouble the home goal. During the final 15 minutes United began to look more threatening though the home side still looked dangerous on the break, a Youseff effort flashed wide while United defenders stood off and let him shoot. At the other end a Skelton cross had home keeper Wragg stretching to hold while Grant Hill got a header on a Martin Lawton free kick. With 5 minutes to go United drew level with an absolute screamer, Lawton put a cross field pass over to Redfern on the right, he moved inside and as he was closed down he teed up Lawton who fired in a beauty from 35 yards in to the top right corner for what is so far United's goal of the season.

Perhaps most people were expecting the points to be shared but United were looking for all 3 and they scored a third in the final minutes, Ainsley Finney broke down the left and fired in a rasping cross which rebounded off home defender Joyner, hit the keeper and bounced over the line for a dramatic winner. There was still time left for Finney to turn from hero to villain when he stupidly got himself sent off, what was going through his mind when he launched himself into such a reckless challenge is anybody's guess and he was shown a straight red from the referee after his earlier yellow for dissent. Thankfully the final few seconds came and went with United holding on for victory. Full Time Parkgate Res 2-3 United