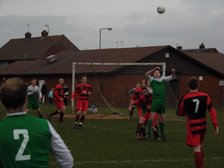 Three from Steve Ellor and One from Ainsley Finney gave the Reds a 4-0 win over New Bohemians.

If the scoreline looks comfortable then that does not tell the whole story as the Reds put in the worst 45 minutes of the season in a first half that saw Mick Russon sent off and keeper Ben Priestley called upon to make a series of superb saves to keep the score at 0-0.

United were first to threaten when Ben Redfern put in a shot but his weak effort did not trouble visiting keeper Nick Wells, Jack Whittaker then appeared to have a clear run at goal but was tugged back by Richardson and though a foul was given the referee didn't take any further action. That was as good as it got for United during a first 45 minutes in which they gave the ball away too cheaply and were indebted to keeper Priestley for keeping the visitors at bay. The first chance came on 10 minutes when Brad Foley got clear down the left, his shot was parried by Priestley and Tony Mullen's mis-kicked clearance while facing his own goal looped up and over the bar. Priestley was then called upon to make a superb fingertip save on to the bar from a Foley curler with Joe Fallows prodding the rebound wide, Priestley then pulled off another great save when he then turned a Ryan Beck shot onto the post after Beck got the opportunity from a mis-kick by Mick Russon. The visitors continued to press as United were sloppy with possession and their problems intensified on 33 minutes when Mick Russon was shown a straight Red Card after he put in a challenge with a raised foot catching an opponent on his thigh. Priestley was then called upon once more as he made another excellent save as he turned the ball overt the bar from a Sean Sly free kick and skipper Ryan Scott put in a crunching tackle with the ball falling to Adam Smith but his shot was too high. The whistle for half time couldn't come soon enough for United as United knew they had reached the interval lucky to still be on level terms and beholden to keeper Ben Priestley having not created a single decent effort at goal. Half Time United 0-0 New Bohemians

The term, a game of 2 halves is often used and what an apt description for this game. United came out of the blocks like an Olympic Sprinter, firstly a Ben Redfern lob found Jack Whittaker but his cross was gathered by the keeper as Steve Ellor closed in then Whittaker got a shot in at goal though the ball was always rising and didn't trouble the keeper. At the other end Foley got in a driving run down the left but his cross was too strong for everyone as it flashed across goal. United had another chance when Grant Hill, under pressure got in a shot at goal which just went wide. The Reds were not looking like a team with a man short and then took the lead on 59 minutes, Tommy Harrison floated in a free kick into the penalty area towards the far post, Paul Mills headed it back across goal and Steve Ellor was on hand to head the ball home to open the scoring. Shortly after it became 2-0 though it was a rather fortuitous goal for the Reds, Ellor put pressure on the visiting defence and as Nick Chellel tried to clear his kick was blocked by sub Ainsley Finney and looped towards goal and over keeper Wells into the net.

Further chances came as United kept on the front foot, a Harrison shot zipped goal wards but was always rising and Hill played in Ellor but saw his effort smothered by the defenders who were able to clear. At the other end a cross from Craig Fox was too strong and didn't concern the United back line before United made the game safe on 71 minutes, another sub, Ashley Cantrill played in Ellor who ghosted past the 2 centre backs before striking the ball home from the edge of the area for a 3-0 lead. Ellor got his third 4 minutes from time with another piece of good fortune for the Reds, a Finney through ball was chased down by Ellor but the onrushing keeper got there first however he saw his attempted clearance cannon off Ellor whereupon the United man was able to sweep the ball home into an empty net. United were not finished yet when Finney fluffed a clear chance to make it five, he did the hard work by getting past a couple of defenders, he then played a one-two with Ellor and with only the keeper to beat he put in a weak shot which the keeper stopped and he was able to clear. The final whistle came with United having secured their 4th successive league win though the second half over the first period was like chalk and cheese for the men in red, lucky to be level at the interval and a man light they were much better after the interval and comfortably secured the points though the players should understand that they will not get away with that type of performance against the other sides looking for promotion. Full Time United 4-0 New Bohemians