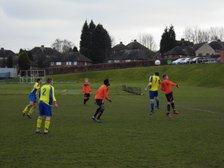 The Reds put last weeks defeat behind them as they won at a canter by 5-0 at Frecheville Reserves.

Facing a team with 5 successive victories behind them the Reds travelled to Frechville Res looking to banish last weeks defeat at Caribbean Sports and they put in a 5 star performance especially in the second half to trounce the hosts 5-0 for their biggest win of the season and close the gap on the promotion places.

The Reds started off well with Steve Ellor getting a shot on target from a tight angle after good work from Ashley Cantrill, they followed that with a cross from Ellor causing major confusion in the home defence and when the ball fell to Luke Skelton he saw his shot blocked. The home side were creating very little with shots from Webber & Hewitt not troubling the Reds keeper. United continued to press and saw headed efforts from Grant Hill and Ainsley Finney just clear the bar. At the other end Tony Mullen was slow in making a defensive clearance and Webber came up behind him and took possession but his shot went way over the bar. After good work from Tommy Harrison the ball was played to Hill and he saw his shot pushed away for a corner by home keeper Johnson. Hill & Ellor had other efforts on goal before United's good start was finally rewarded on 22 minutes, Hill played a ball out to Finney and his fierce drive was beaten out by the keeper but the ball fell invitingly for Ellor who headed it into goal to give the Reds the lead.

United were well on top and Finney, Mills and Skelton all had chances to increase the lead though this good play was almost undone when a long ball out of defence saw Webber get clear of skipper Ryan Scott but keeper Ben Priestley came out to smother the danger. Other chances followed for the Reds but Frecheville still looked to level on their periodic forays to the United goal, Harrison had a pass intercepted by Nidza, he raced clear to goal but the onrushing Priestley deflected his shot for a corner. The half finished with a great effort from Ellor, taking the ball from a Hill throw in on the left, Ellor moved forward a couple of paces before unleashing a tremendous shot which the keeper somehow, more by luck than judgement, managed to deflect onto the bar. The half ended with United wondering why they were only 1-0 in front. Half Time Frecheville Res 0-1 United

United increased their lead in the opening minute of the second period, a Tony Mullen free kick was floated into the penalty area and Mark Gedney, getting better with each game after injury, rose highest to get a deft header and direct the ball into the net. From then on it was all United as Frecheville offered very little, Finney fired wide, Ellor followed that with a shot of his own that flashed just past the post and when Finney charged down an attempted clearance again Ellor got a shot away which just went wide. United's dominance earned them a 3-0 lead on 71 minutes when an Ashley Cantrill cross was mis-kicked by Moody as he attempted to clear and Ellor pounced to fire the ball home for his second and United's third. Three minutes later it was 4 and Ellor got his hat trick, sub Martin Lawton broke up play as Frecheville were moving forward, he strode forward before releasing Ellor who raced away to make no mistake and he struck the ball past keeper Johnson.

United were looking utterly ruthless now and had other attempts at goal while in defence Scott, Mills, Cantrill and Mullen never gave the home side a thing. Ellor shot at goal, so did Hill who saw his lobbed effort just clear the cross bar with the keeper well beaten and it came as no surprise when the Reds got a fifth, Cantrill and Ellor played a wonderful 1-2 to open up the home defence down the right wing, Cantrill moved into the penalty area and played the ball across goal to the waiting Finney who side footed the ball into goal to set the seal on a dominant United victory. Full Time Frecheville Res 0-5 United

Comment
This was very good outing from the Reds who put last weeks defeat at Caribbean Sports firmly behind them, the 5-0 score line does not do United justice as they were in complete control for the whole game. In addition to Steve Ellors treble there were also good performances from Mark Gedney, Ashley Cantrill and Luke Skelton though all 12 players in action today can be well pleased with their contribution, Well Done Lads