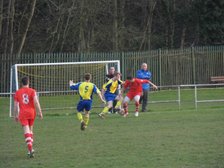 United Win But leave It Late At Worsbrough Bridge

Despite dominating for large parts United had to wait until 10 minutes from time to break the deadlock, a penalty and an OG then gave them victory.

United went top of the table with a fully deserved victory away at Worsbrough Bridge though their stay at the summit may only be temporary as the Reds have no game this Saturday and neighbours Denaby Main are only a point adrift with 3 games in hand. United dominated the game almost from start to finish but numerous missed chances meant it took a penalty 10 minutes from time and an OG in stoppage time for United to take all 3 points.

Steve Ellor almost gave United a dream start in the opening seconds, getting free of the home defence he raced to goal but saw his attempted lob stopped by the out stretched arms of home keeper Davie. Mick Russon then headed a corner back across goal and Grant Hill got to the loose ball first but his header went wide. Danny Fozzie had the host's first opportunity but his shot was parried by United keeper Ben Priestley and Ashley Cantrill completed the clearance. With the game only 6 minutes old United had yet another chance to take the lead, Russon played in Paul Hemmingway and just as he was about to pull the trigger the host's skipper Sam Keen put in a goal saving tackle. United continued to be on the front foot with a dominant Reds side forcing the home side back, further chances fell to Whittaker and Ellor who might have had a hat trick as he again got free and tried to lob the keeper as well as getting in a header from a Hemmingway cross.

The home side were restricted to long range efforts which all went high and wide though from a long throw in into the penalty area reached Cheatham and he swivelled to prod the ball just wide. With Ellor and Hemmingway looking mobile up front they were pulling the home defence in all directions as they moved on to some lovely passes from a United midfield of Skelton, Russon, Whittaker and Gedney. Ellor chased down a defender and caused him miskick giving Hemmingway a chance at goal but he too miskicked to leave keeper Davies with an easy save to make. As well as the mobility of United's forward play the Reds were also proving to be a handful at set pieces as firstly Russon and then Scott followed by Hill all had headed efforts at the home goal. How it remained goal less at the break no one knows. Half Time Worsbrough Bridge 0-0 United

In the opening minutes of the second period skipper Ryan Scott connected from a corner but saw his goal bound header stopped on the line before a half clearance found Hill who lashed in a shot turned round the post by the keeper. Still United pressed as efforts from Hill, Ellor and Skelton were all unsuccessful. Though United were still on top they were not as dominant as the first period as the home side created a few chances of their own, a Gregory cross was turned goal wards by Fozzie but the ball looped over the bar and from a long thrown in Gregory, with his back to goal flicked the ball over his head but the ball fell kindly into Priestley's hands. Some good combination play between Hemmingway and Ellor saw the latter have a chance which the home side were able to block and clear for a corner and from a Skelton cross Hemmingway headed over the bar. So far United had created enough chances to win numerous games but still they could get their noses in front in this one.

Another long throw in for the home side had United in a bit of trouble but they cleared and put in a fast break with Whittaker racing clear but his toe poke pass had too much pace as Hemmingway attempted to get to the ball. With 15 minutes left and no breakthrough yet United brought on Ben Redfern and Ainsley Finney for Hemmingway and Whittaker as they tried to get their noses in front and just 4 minutes later they did just that, a throw in from the right reached Ellor close to the goal line and inside the penalty area, with his back to goal he played the ball over his head but Sam Keen blocked it with an arm raised above his head leaving the referee no option but to award United a penalty, Ben Redfern stepped up and confidently dispatched the ball to the keepers right giving him no chance to make a save. Half chance efforts from Redfern and Hill were not taken and goal machine Ellor showed it was not to be his day when he got clear after racing on to a clearance from Ryan Scott and with only the keeper to beat saw yet another effort saved. with United looking to see out the game they got a second goal in stoppage time when Ben Redfern Hill put in a cross from the left and under pressure Sam Keen headed into his own goal to add some breathing space to an impressive United performance. Full Time Worsbrough Bridge 0-2 United

Comment
This was a very good display from the Reds, the first 45 minutes especially being as good as we have seen all season and it remains a mystery as to why the game remained goal less during that first period. A similar pattern in the second half could have frustrated the Reds but they remained patient throughout and the 2 late goals were just reward for the team who might have scored a hat full had they taken the chances they created. Well done lads.