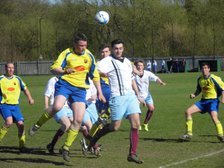 A 5-1 win at Sheffield lane Top ensured United got the 3 points needed to guarantee promotion.

United put in an edgy first 45 minutes but came out all guns blazing in the second period to blitz away their hosts who rarely looked liked getting anything from the game.

The Reds actually started well with Steve Ellor looking lively, firstly he got in a lobbed shot after a cross field pass from Luke Skelton, he then got free as United broke quickly defending a long throw in inside their own penalty area. Skipper Ryan Scott headed the throw in clear to Paul Hemmingway who played the ball first time for Ellor to run onto, Ellor appeared to be tugged back by home defender John Thompson and his momentum was halted with the ball running through to the home keeper. On 8 minutes United should have had a penalty, Mick Russon lobbed the ball forward from midfield and with Ellor racing towards the goal the home keeper Williams came out and charged into the United man sending him falling to the ground but the referee didn't see it that way and gave a goal kick.

Lane Top then had a couple of efforts at goal, firstly John Thompson got his head to the ball from a corner but saw his effort just go over then Alex Thompson saw the ball bounce up nicely for him and from 35 yards volleyed just over the bar with United stopper Ben Priestley well beaten. On 14 minutes United took the lead, Ashley Cantrill fed Hemmingway down the right and from the goal line he pulled the ball back across goal where Luke Skelton was on hand to side foot the ball into the net. this lead didn't last long and 3 minutes later the hosts were level though this was a goal due to bad play from United, Keeper Priestley put Tommy Harrison in a difficult position with a foolish throw out of goal, the harsh bounce meant Harrison lost possession whereupon a home player crossed the ball and though Tony Mullen tried to head it clear the ball instead deflected to home striker Liam Lynch and he reacted quickly to poke the ball into the net and level the scores. This equaliser seemed to un-nerve United and they began to lose possession rather sloppily though in fairness they were still too strong in stopping the hosts creating anything. With the ball bouncing high due to wind and a dry pitch United didn't create much themselves with a Mick Russon lob which had the goal keeper struggling the only chance of note. Half Time Sheffield Lane Top 1-1 United

The management team of Paul Noonan and Andy Price had some harsh words to say at the interval and whatever they said did the trick because United regained the lead on 49 minutes. A free kick defended by the Reds was cleared by Scott with the ball reaching Hemmingway down the right, he put in a pass to Ellor by the far post who in turn squared the ball across goal where it was met by Mick Russon who had raced forward in support and he put the ball away. Soon after a pass out of defence by Paul Mills soared over the home defence and Ellor steered the ball towards the goal but on the stretch his contact didn't trouble keeper Williams. A corner was then well met by Russon but his header just cleared the cross bar. On 57 minutes a mistake from Scott gave Lane striker Alex Thompson a clear run at goal, Thompson played the ball past the out coming Priestley and with the ball running wide there was just too much pace on the ball for Thompson to catch before it went too wide for him to take advantage of. Two minutes later United had some breathing space when they got a third, out on the left wing Paul Hemmingway put in a wonderful cross that was just begging to be headed and Steve Ellor duly obliged steering the ball into goal for a 3-1 United lead.

Russon followed this with a volley that just cleared the bar and Harrison met a corner but saw his header just a little too high, the Reds were now bossing the game with little or no threat from the home side and Hemmingway got a shot away from an Ellor cross which was deflected. On 66 minutes United made the game safe, Mark Gedney received a push in the back as he challenged for a corner and the referee gave a penalty which was dispatched confidently by Hemmingway to give United a 3 goal cushion. With any threat from the home side non-existent United continued to take the game to their hosts, sub Ainsley Finney had a couple of shots at goal but high bouncing balls saw his shots go wayward. United completed the scoring with a fifth and a second for Hemmingway, a long clearance from Tony Mullen fell perfectly for Hemmingway and taking a couple of paces towards goal he struck the ball sweetly and saw the ball sail past the stranded keeper and inside the left post. Though that was the end of the scoring it wasn't the end of United's goal threat, a Finney cross was dropping nicely for Mark Gedney to head at goal but team mate Paul Mills just deflected the ball wide after getting a touch of his own. Right on time a mazy run from Jack Whittaker saw him breeze past 3 defenders but his shot lacked the power to trouble the keeper. Full Time Sheffield Lane Top 1-5 United

Comment
It was a flustered edgy performance for the first 45 minutes though the hosts didn't look capable of taking any advantage from it. The second period saw United put in a display that we know they are capable of as they bossed the game from minute 46 to minute 90 with United full value for their 5-1 win.