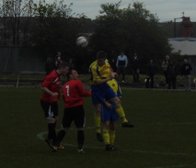 Local Pride All Square As Denaby Derby Ends Even

A Steve Ellor goal cancelled out by Nathan Lovell meant Main & United had to settle for a draw at Tickhill Square.

With promotion assured United travelled to Tickhill Square to face a Main side that on paper still needed a point to win the league but in practice with a 12 goal advantage over second placed Caribbean Sports the title was already won.

The first 45 minutes proved to be a dour affair though United did have the ball in the goal after 3 minutes when Steve Ellor but was given offside, the chance occurred after a pass from Grant Hill and Main keeper Kyle Takac cleared with a punch as Ellor closed in, from the throw in the ball found it's way to Ellor and he put the ball into the net but any joy was short lived as the goal was disallowed for offside. A long throw in for Main gave them their first opportunity and after the ball was only half cleared Gary Hancock put in a shot which was going wide but found it's way to Eley in an offside position. The half continued in a rather cagey fashion as both sides failed to put together any meaningful attacks with the home side having a couple of players spoken to by the referee for a couple of off the ball fouls.

On 25 minutes a series of ricochets' saw the ball reach Tommy Needham but he shot over and a long punt forward from Richie Bywater had United keeper Ben Priestley back pedalling as he came out to collect but in trying to minimise the danger Ashley Cantrill, skipper for the day, headed it past him back to the United goal, thankfully it went wide for a corner. From this corner Priestley was called upon to make 2 saves with a few seconds of each other, firstly he turned the ball onto the bar from a right wing cross and then turned the ball over the bar after a header from Danny South. this corner saw South get his head to the ball again but his effort went wide. Indeed the high ball into the box for South seemed to be Mains best opportunity as United were able to marshal their attacking play quite comfortably though in fairness United were creating very little for themselves. United's clearest chance of the half came 37 minutes when Grant Hill got clear down the left and put in a cross which Paul Hemmingway met on the volley but his effort zipped over the bar. Danny South managed to get another headed effort at the United goal from a Nathan Lovell cross but the chance went wide as the half finished scoreless. Half Time Denaby Main 0-0 United

United improved after the break, Tony Mullen played in Steve Ellor down the left but saw his cross gathered by keeper Takac then Tommy Harrison put a free kick into the penalty area, the ball was spilled by the keeper but he dropped onto the loose ball before a United player could react, a second free kick from Harrison just cleared the far post and went for a goal kick in a crowded area. Some quick interplay between Hemmingway and Ellor gave the latter a shooting chance but he saw his effort go over the bar. United were looking the stronger side as Hill saw his shot blocked after an Ellor cross while at the United goal Hancock saw his header fall safely for keeper Priestley. Main's Nathan Lovell, who made one appearance for United earlier in the season, was cautioned for an off the ball trip on Jack Whittaker before United took the lead. Main only got the ball half cleared before Tony Mullen headed the ball back towards goal where Steve Ellor was lurking and he lobbed the ball wide of the keeper to break the deadlock. Main responded with a weaving run down the left side of the penalty area by Lovell but his cross was cleared.

As United coped comfortably with some lack lustre Main attacks the Reds were looking to break at pace and Steve Ellor found himself the victim of a couple of crude challenges from Deakin & Spratt but picked himself up to lead the attack as United looked to increase their lead. A wayward Danny South shot went high and wide for Main before they equalised on 79 minutes against the run of play, sub Danny Phillips got clear down the right and from the goal line pulled the ball back where Nathan Lovell was waiting and he side footed the ball into the net for a leveller. This goal seemed to spur Denaby Main as they went forward looking for a winner and pressed United back, a right wing move saw the ball reach Needham and with his back to goal hooked the ball goal wards but his effort went wide. Main continued to have the momentum as United were defending but thankfully did not create any clear chances as the game ended with honours even and Denaby Main getting the point they needed to confirm their position as champions. Full Time Denaby Main 1-1 United
Comment
Both sides may feel they did enough for victory, in a dour first 45 minutes the presence of Danny South caused United some problems as he had a couple of headed chances while in the second period United, for the most part were the ones who were on the front foot and they looked dangerous on the break and snuffed out most things created by the home side. Whatever one's point of view the one thing for both sides is that they will meet again next season in division 1 as both sides have been promoted.