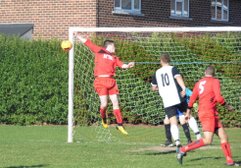 Visitors Grimethorpe Sports, who did the double over United last season, thought they had grabbed a point with a late leveller but saw their joy short lived with a linesman raising his flag for offside, a decision they did not take kindly to. The incident then seeing a Grimethorpe player cautioned for his over zealous complaints as tempers became inflamed before the same player was then shown a red, though he had already been subbed by this stage, for further comments made to the officials.

That controversy aside, United started the game strongly, a long throw from Sam Hutton caused a scare for Grimethorpe as the ball zipped across the goal without anyone getting a touch, however the Reds did take the lead on 9 minutes, Steve Ellor out wide on the right passed inside to Silas Collins, initially it seemed as if his chance to shoot was lost but he managed to swivel and fired in a shot across the keeper which nestled inside the post, Collins was to receive a number of robust challenges as his pace looked to cause problems. A second effort followed with a Sam Hutton header just wide from a cross by Aiden Oakley. At the other end Carl Robinson had to save low down as he smothered an effort from Tony Bennett. Midway through the first 45 United grabbed a second, Ellor fed the ball out to Ashley Cantrill on the right and his fired in a cross which was headed into his own goal by visiting defender Tom Anderson. It might have been even better moments later when Mark Gedney saw his shot saved by keeper Soar. The visitors responded with the Bennett brothers, Lee, Tony and Steve all looking lively with Grimethorpe firing a number of shots at goal, some missing others saved by United stopper Robinson. They did however reduce the arrears right on the break, Steve Bennett stabbed the ball out to brother Tony in space just left of the goal and he fired home to make the score 2-1 at the interval.

With the wind in their sails Grimethorpe had the best of the second period with all the Bennett brothers probing the United defence, and it was not just them causing issues as Johnson fired in a shot and Lee Bennett firing over as well as Eastwood looking menacing as he went forward from full back. Though Carl Robinson was called upon to make a couple of saves some dogged defending from the United back line stopped the visitors from creating a really clear opportunity. It wasn't all one way though as United created opportunities with a zipped cross from Oakley, the same player then fired in a shot when he might have been better passing to Hutton who was in space, there was also a shot from Liam Ramsay which was blocked for a corner. It was the goal disallowed for offside, which would have seen Grimethorpe get a point, that will leave a bad taste in their mouth. With all the controversy that followed the decision it is difficult to remember who put the ball in the net but with the linesman indicating offside, disallowed it was despite the visitors claiming a United man was on the goal line. As described earlier this inflamed tempers from some visiting players with a number of cards shown including that of a second yellow for the player who had already been subbed but the officials stayed firm in their decision and the goal remained invalid.