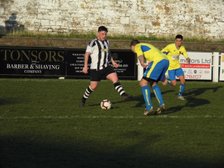 United Lose Out in Local derby

The shortest journey of the season saw United travel to Mexborough Athletic to face a Swinton Athletic side who now seemed as if they were coming into some form after a slow start to the campaign.

The home side started in the ascendency and had a lot of possession without forcing any real difficulties for the United back line, indeed the only moment of concern came when United gave the ball away sloppily and Enzo Guarini raced away but his shot was blocked and went for a corner. For United the one chance in the early stages came when Silas Collins fashioned himself some room for a shot but slipped just as he was about to pull the trigger. With most of the possession Swinton took the lead on 27 minutes, Ash Emmett made a neat back heel which fell nicely for Guarini and he made no mistake. Aiden Oakley saw his right wing cross shot just flash the wrong side of the post while the United were glad to clear a goal mouth scramble.

On 39 minutes United got level with an outrageous fluke, Liam Ramsay skipped past a challenge in the right wing position and just launched a cross into the penalty area, to everyone's amazement the ball arched over every player and nestled inside the far post to level matters. United might have had a chance to take the lead when Callum Black fired in a shot which appeared to strike a hand but the referee was having none of it and continued play. United got a sickening blow with the last kick of the half, attacking down the right the ball was played back from the goal line and Darren Walker, for the home side, was in acres of space to side foot home to restore his sides lead.

The second half was a mirror image of the 1st half, the home side having most of the play without putting United under any great concern though a couple of tidy saves from Kyle Matthews were needed to keep it that way, however it was a mistake from Matthews which gave the home side a 2 goal advantage, a long kick from Swinton keeper Watson didn't appear to much of an issue, but Matthews came off his line unnecessarily and Guarini prodded the ball into an empty goal when had he stayed on his line there seemed enough defenders around to snuff out the danger. With a 2 goal deficit United really should have had a penalty when Jake Ford climbed all over Paul Mills but the referee bottled his decision and let play continue. With 2 good penalty appeals turned down the referee really put himself on a pedestal when he brought play back from a United throw close to the Swinton goal and gave a free kick in the United penalty area to 'United!!!'. Whatever was he thinking about

Swinton were to get a 4th goal when Regan Kelly took possession on the right edge of the area and he dribbled his way across the front edge of the penalty area before firing in a left foot shot. There were probably a few players from both sides who should have seen a card but the referee seemed unwilling to take any formal action, this approach best illustrated right at the end when Aiden Oakley was grappled to the ground as he raced forward however apart from the free kick no other action was taken because in his words "it was the last minute of the game". The home side fully deserved the 3 points but had the referee done his job properly then who knows what might have happened.