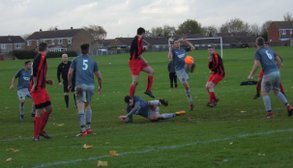 As the teams lined up at the start of the game a moment of silence and reflection was held to commemorate the 100 year anniversary of the armistice at the end of World war 1.

Following the act of remembrance the game started with Dodworth, the joint league leaders, looking to impose themselves however the early stages were quite even. The game then looked as if it might get away from the Reds as just after the 15 minute mark the visitors scored 3 goals in a six minute spell. Goals one and two came when the ball was lofted over the United back line and fell nicely for Dodworth players who had beaten any claim for offside and on each occasion the ball was calmly dispatched into goal. The 3rd came from a free kick after Mark Gedney was penalised for a foul some 25 yards from the Reds goal though keeper Neil Spruce will be disappointed that he didn't save as the kick had no pace or height on it and it only needed the keeper to put out a hand to stop it but it sailed into goal to give the visitors a 3-0 lead.

In previous seasons United might have collapsed to an embarrassing defeat however their spirits were raised only seconds after conceding that 3rd goal when Sam Hutton pulled one back with a thunderous left foot shot after being fed the ball by Silas Collins. Before the break United reduced the arrears still further when Steve Ellor scored from the spot after a handball. The comeback was complete only a few minutes into the second period when Silas Collins got United level, going on a mazy run down the left he stalled his movement before floating in a cross/shot which somehow found it's way inside the far post. Only Silas will know what he was trying to do but nonetheless whatever his intention United found themselves on equal terms.

Dodworth clearly felt they had taken their foot off the pedal and pushed forward playing some neat football however the didn't really create any clear chances apart from one cross/shot which scraped the bar, indeed the best chances fell to the Reds, Aiden Oakley fired in a fierce drive which the keeper saved low down and Steve Ellor saw his long range lob go wide. The game even saw a change of referee with an injury to Mr Kettel, his assistant taking over however with no further goals both sides had to settle for a point.