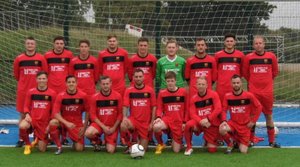 Player shortage does United no favours

With only 10 players for the first 45 minutes and conceding 3 penalties, United proved no match for title challengers Dodworth MW

It proved a bad day for United with a number of players not making themselves available meaning the team took to the field with only 10 men and they soon went 1-0 down though this was down to the incompetence of an assistant referee who inexplicably failed to indicate an offside rather than player numbers. The referee was soon to get in on the act of making naff decisions when he gave a penalty to the home side after a tumble in the area though United would argue the home player fell over his own feet, a successful spot kick made it 2-0. If United felt aggrieved over the first 2 goals they can have no complaints over the 3rd with a sublime free kick that kept low and found the inside of the right post.

With a late arrival United were at least up to the correct number of players for the second period but 2 further penalties (no complaints this time) and a couple of other goals ensured United would go home on the end of a big loss and while no one would deny that the best team won, they also missed a number of chances and produced some good saves from Josh Haines, United were not served well by some poor first half decisions by the match officials.
Dodworth MW 7-0 United