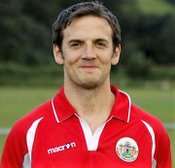 The club is extremely pleased to announce the management team for the coming season. Dewi Llion will continue his role as first team manager and will be assisted by 39 yr old Owain Roberts from Llanefydd.

Dewi Llion had this to say about the appointment -

“I am glad to finally announce Owain as Assistant Manager. Owain is someone who as a player I looked up to in terms of his work ethic, his attitude and his will to win. These aspects will prove vital if we are to challenge for the League this season. Owain won this league, the Welsh Alliance, under Richard Williams-Cooke and has played at a high standard through out his career. He will also sign as a player this season and will certainly contribute on the field when called upon. We need to get the most out of the players this season and the local lads will surely have a big part to play in our title challenge. Therefore, having arguably the best player from the local area over the past two decades involved in training every week is only going to increase the intensity of the sessions, and hopefully Ows’ attitude will rub off on the whole team.”

Owain has an impressive Footballing CV, having played for Colwyn Bay in the Northern Premier League before returning to play his football in the Welsh system. He played in the Welsh Premier League for several years for both Porthmadog and Bala Town, and was an integral part of Colin Caton’s league winning side. He later joined Denbigh Town and was part of the double winning, unbeaten side that won the League and Cup double. Owain is also considered a Summer League legend having been an ever present figure in the Cefn side for many years and is extremely well known in the Vale of Clwyd. Described by many of the Denbigh Town FC committee members as the best player to originate from the area, Owain will be a massive asset to the club.

We managed to speak to Owain and he said " As a local lad I just want to see Denbigh do well, develop young players to become better players and hopefully bring some success to Denbigh Town FC. I think the set up is first class and I am looking forward to the challenge."

Welcome back to Central Park !