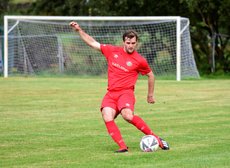 Dan, how long have you played for Denbigh town, and why did you join Denbigh for this season?

I signed for Denbigh in September last year and previously spent a couple of seasons at the club a few years ago. I decided to sign for Denbigh this season because it’s a great club with fantastic people behind the scenes. I was a part of the squad which got relegated last season and I’d love to get the club back to where it belongs!

What season, would you say has been your best on a personal level, and why was it?

On a personal level, I’d have to say winning Managers and Players Player at Llandyrnog in 2017/2018 season. Ryan Harden was the Manager at Llandyrnog during that season and he put a lot of trust in me and gave me the chance to play football week in week out.

Is there a favourite footballing moment, that sticks out in the memory to you?

Tough one! I would have to say playing live on television for Denbigh vs TNS in the Word Cup Final, a great experience. Also, a Boxing Day win over Ruthin last season in front of a huge crowd! It’s always nice to get a derby win!

Who is the best player you’ve played alongside and why?

I played a couple of friendlies for Bala when I was 17 with Mark Jones who is a ex Wrexham and Wales International. He is easily the best player I’ve played alongside, such class on the ball. You could pass to his left or right foot and he would get hold of the ball and make things happen. What a talent!

Who is the best player you have come up against and why?

Scott Quigley who played for TNS in the Word Cup Final against Denbigh. He was so powerful, quick and direct. The summer after we played against him he signed for Blackpool in the football league.

Away from football, what do you enjoy doing?

I like to keep myself fit by running and going to circuit training. I also enjoy travelling, spending time with the family and watching football whether that’s watching local football or supporting Liverpool FC.

With the first two months of the season gone, what do you make of the start we have made?

We've had good start to the season winning seven games and losing two games in the league and currently stand top of the league. Its a long season ahead and I’m still gutted about losing to Holyhead Hotspur, it was so disappointing that they scored with the last kick of the game. Last weekend 's Welsh Cup defeat was another tough one to take but we are a very young squad and I’m sure as a group we will learn from these defeats .

I would just like to thank everyone associated with the club who spend so much time making sure everything is to the highest standard. Also, it’s been great to see so much support, with lots of fans following us home and away. Your support is really appreciated by all the lads.