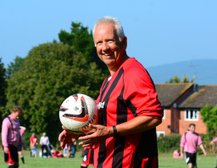 How long have you volunteered for Denbigh Town FC?

I first started volunteering, like many parents do, as a coach for the under 11s and stayed with the team until they finished at u16s then assisted with the u18 team for a few years and have been club secretary for past four seasons...... so 12 years in total so far I think.

Why do you volunteer for Denbigh?

I first started because my lad wanted to play football and there was no local team at Denbigh in that age group. I wanted a break after coaching but the club needed a Secretary and Shon Powell can be very, very persuasive.

Who has been your favourite Denbigh Town player over the years?

I never really watched the senior team until I became a committee member but without a doubt I believe Craig Pritchard was most entertaining player I have seen at Central Park. He was outstanding when Eddie Maurice-Jones was here as manager and we nearly topped the Cymru Alliance.

Is there one game that sticks out most in your memory?

The Welsh Premier League Cup Final [ TheWord Cup ] in January 2016 at Llandudno against TNS was the most memorable game I have seen. The manager was Gareth 'Perry' Thomas assisted by Elfed LLoyd and Kev Roberts and it was the first time that a non Welsh Premier League team had reached the final game in that competition. The build up by the FAW and by our club was exiting and the game was shown live on TV with a thousand people at the ground including the National team manager Chris Coleman. To be honest last season's derby win at home to Ruthin was pretty good too !

Away from Football what do you enjoy doing?

Football takes up way too much of my time! I actually work as a taxi driver driving a minibus mainly with a regular school run to Tir Morfa special needs school in Rhyl and doing doing the odd airport run and that sort of thing. I like to try and keep fit and enjoy photographing and watching wildlife.

What are your hopes for the season ahead?

I am very happy that Dewi is still here as manager and realise that, yet again, after players leaving the club we have had to rebuild. It is not necessary, in my view, that we get promoted straight away although other committee members may have different opinions. I want us to win a lot of games and end up in the top group of teams and want all the young players to feel they belong here at the football club. They need to be the future of Denbigh Town FC. We have a good, very young group in the Development side and some young players in the reserves and it is good that Dewi is keeping abreast of things and is willing to give them chances if they show promise. I would like to win a cup if I am honest - any cup!