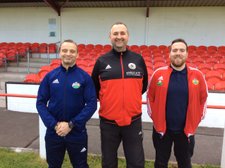 New Management team for the Reserves

Denbigh Town have appointed Nick Hailes as the new Reserve Team Manager and he will be assisted in his role with Johnny Roberts as Head Coach and Gethin Jones as Coach.

Nick is well known to everyone at the club having been the Development Team Manager in 2017-2018 before he moved to Llandyrnog Reserves last season. He also held the post of secretary for the Club some years ago. He said "I am really pleased to be back involved with Denbigh Town FC. I know most of the players well and there is so much talent within the squad. We have arranged a few friendlies already and I just can't wait to get started".

Johnny will be Nick's Head Coach having been in a similar role for the last two seasons when previous manager Kev Roberts was in charge. He has a wealth of experience as a coach and holds a B Licence coaching certificate

Gethin joins the Club in his first senior coaching role having coached the Bala Academy Under 16's team for the last two seasons. He has recently completed his UEFA C Licence coaching course and looks to start his B Licence shortly.