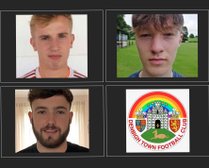 During a recent on line Zoom get together our Reserve Team squad held their presentation night during which three players received the following awards:-

Most Man of the Matches - Sam Lewis

The Reserves have once again had a successful season with a number of players from the set up looking for places in the first team squad next campaign. Manager Nick Hailes and assistant Gethin Jones have yet to hear if they have won the league after the 'points per game' calculations have been made. There is controversy regarding the Bangor City reserve team as they continually played a number of games with too many regular first team players and the Welsh Alliance were to decide the matter at the next Executive Board meeting which has been delayed because of the COVID19 situation.

Either way the management team and players can be very proud of their season.