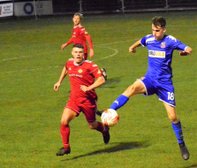 Dewi and Owain gathering the team together

21 year old Jacob Parry will be part of the first team squad this coming season and is the first player to come through from the present Development Team > Reserve Team > First Team pathway.

He is a strong defender who has good ball control and can play football on the ground building up play from the back. He can also move up front when unexpected and often pops up to be rewarded with a goal scoring opportunity.

He was an important player this past season for the Reserve Team and was awarded the Players' Player trophy during the recent presentation night. He played for the first team at Bangor City earlier in the year and impressed Dewi Llion.

Jacob said " Dewi has spoken to me and offered me encouragement to go on and improve my game. It will be great to be part of the First Team squad and I intend to do well. I know I have things to learn but will not be daunted and am looking forward to it. "