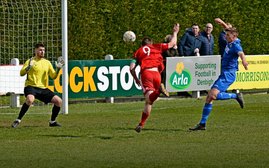 Denbigh will have to wait until other teams around them have finished their fixtures before they will find out which league they will be paying in next season. A first half hat trick from captain Mark Roberts helped secure the points in their last game of the season against a Llanrhaeadr YM team who were also in the relegation fight for survival.

With Holyhead Hotspur already relegated and with Penrhyncoch and Holywell playing out a 3-3 draw, this meant Llanrhaeadr YM are safe as they cannot be caught by the three teams below them. Denbigh’s win means they are now relying on both Holywell and Penrhyncoch dropping points in the games they have remaining. It’s out of Denbigh’s hands now.

Joint managers Matty Jones and Dewi Llion started with Sam Downey joining the team after being unavailable earlier in the week with Jake Walker moving to the bench.

Denbigh had the better of the early stages with Kristian Pierce having a first time effort from 20 yards comfortably saved by Llanrhaeadr’s keeper Haynes. Mark Roberts was unlucky then had to see his header from a corner hitting the post with Haynes stranded.

Denbigh’s pressure told on 15 minutes when a through ball saw Mark Roberts run onto the ball and lob it over Haynes to give Town the lead.

The visitors responded and Town keeper Craig Vernon was forced to dive to his right hand side and parry the shot away to safety.

Mark Roberts thought he’d had his second on 21 minutes when he climbed higher than anyone else to head goalward. The ball hit the post again and was cleared away by relieved Llanrhaeadr defenders. Pierce and Roberts then linked well and Roberts’ acrobatic shot was palmed away by Haynes.

Llanrhaeadr then had their best spell of the half and from an inswinging corner Denbigh defender Dan Lloyd headed off the line. Vernon was then forced to make a save from a free kick 20 yards out.

Denbigh doubled their lead on 38 minutes and this was down to some strong play down the right wing from the talented Scott McHarrie as he shrugged of a foul and the referee allowed play to continue. The youngster sent a brilliant pin point cross into the Llanrhaeadr penalty box and Mark Roberts met it and headed home (see photo).

A minute later and Roberts had his hat trick once again racing clear and finishing well to give Denbigh a deserved 3-0 lead at half time.

The second half saw both sides having chances. Sam Downey was unlucky for Town with his header and shortly after Pat Hinchcliffe played a ball to the impressive Lewis Sirrell who saw his shot go just wide of the post. Llanrhaeadr had a free kick from Matty Jones but this went straight into Denbigh’s wall and the follow up shot went way off target.

Kristian Pierce took a knock and was replaced by Jake Walker on 60 minutes and he went so close to extending Denbigh’s lead only for his glancing header to be well saved by Haynes. Andy Thomas came on for Pat Hinchcliffe and straight after Scott McHarrie was forced to leave the field with a hamstring injury and so Sion Jones came on.

The changes unsettled Denbigh and from a Llanrhaeadr attack on 75 minutes Miles Todd was judged to have fouled the visitor’s striker just on the area- or so it seemed to the Denbigh players. Instead referee Mark James pointed to penalty spot and Khyam Wyton stepped up to blast past Vernon to make the score 3-1

A nervous fifteen minutes then followed which seemed an eternity as Denbigh looked to hold onto their lead. They continued to make chances and Curtis Langton sent over a low hard cross from the right wing where Andy Thomas made a diving attempt to head the ball home but was inches away from connecting to what would have been a spectacular goal for the sub.

Joint manager Matty Jones said after the game “So that’s it after an up and down and incredibly tough but enjoyable season. It’s now out of our hands. I thought all the players did so well today and put in a great team performance. We now wait and see what happens over the next fortnight.”