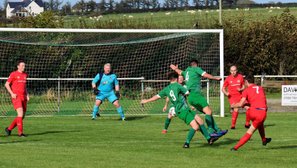 A disappointing result saw Denbigh go down to a controversial first half penalty in a game that was dominated by a strong wind. The loss sees Denbigh remain top of the Lock Stock Welsh Alliance League 1 with Holyhead Hotspur three points behind but with two games in hand.

Manager Dewi Llion had to make a late change to his starting eleven after Stuart Vernon had to pull out due to a work related accident that morning. Les Brophy moved to right back with John Terry moving to centre half and Sion Jones starting the game following his impressive display as a substitute last week.

Denbigh played into the strong Anglesey wind in the first half and the game started with some hefty fouls on the Denbigh players with Dan Clarke bearing the brunt of these. Bodedern used the wind to their favour and Sion Jones did well to intercept a break just outside his penalty box. Dan Lloyd was then called into action to clear a dangerous cross from Bodedern’s Cavan with an attacker breathing down his neck.

On 35 minutes came Bodedrn’s goal when a high ball was pumped towards the Denbigh goal. Bodedern’s centre forward Dean Redmond tussled with Town’s centre half Miles Todd just outside the penalty box. Referee Kelvin Lewis judged there to have been an infringement caused by the Denbigh defender – possibly a handball, and he indicated a free kick just outside the box. The referee’s attention was then drawn to his flagging assistant and after some time referee Lewis changed his mind and awarded Bodedern a penalty kick instead. Up stepped Redmond to send Denbigh keeper Antoni Sarnowski the wrong way and this was enough to give the Anglesey team the lead.

It could have been two moments later when Sarnowski was called into action again from a Cavan free kick which he palmed away to safety.

Denbigh responded and both Dan Clarke and Jake Walker both had half chances which came to nothing and half time came with the hosts one goal to the good.

The travelling supporters looked for a better second half from Town as now they had the wind behind them. Early on, Sion Jones brushed off a couple of challenges to force his way into the penalty area and lay the ball off for Sam Tate whose shot went over from 12 yards. Jake Walker then did well as he progressed into the box and shot only for his attempt to be blocked by Williams and deflected away for a corner.

The game went through a scrappy spell with Denbigh’s long ball being carried by the wind away for goal kicks and referee Lewis having to stop the game for various fouls as the game became contested in the middle of the pitch rather than the Bodedern half. The home side defended well with Williams and Leach giving Denbigh’s striker Jake Walker few chances throughout the afternoon.

Denbigh made a change with Lewis Jenner coming on for Sam Tate in the latter stages and whilst Denbigh did rally with well struck shots from Billy Holmes and Dan Clarke (see photo), the Bodedern defence held firm for them to contain their lead and come out winners.