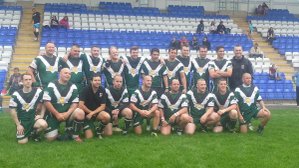 Everyone likes a fairy tale ending and that is exactly what Derby City were hoping to do at the Midlands Rugby League finals day. 5 minutes into the match and clever work down the short side from Captain Lee Chapman sent Aaron Robinson in for the opening score. From the re start a small incident resulted in a Leamington player sinned binned, with Derby 4-0 up, a man up and on the roll everyone thought that the fairytale was well and truly underway, however looking back the sin binning was the worst thing that could have happened as the Leamington players galvanized their offence and caused Derby far too many problems to deal with.

By 16 minutes when the sin binning was up the scores were 4-18 to the Royals and when the numbers were even this was further stretched and by half time the scores were 38-4. All the talk at half time was about getting off to a good start and putting the Royals under pressure and that was exactly what happened, stronger defense and a desire to go forward resulted in Derby’s second try of the game through Darren Doherty, goaled my Reza Kashefi to make the scores 10-38. Moments later Doherty went crashing into the line again but smart work from half back Kashefi who gave a dummy and crashed over himself, goal missed.

At this point the fight back was well and truly on however a break away try from the Royals crushed the spirited Derby team. Derby who were previously unbeaten in the league weren’t playing like the side there truly were and made uncharacteristic mistakes which coupled with a well structured Royals attack proved to be deadly.

However Derby did manage to get a late conciliation try when Alex Dale popped out a back handed pass that Jamie Lyon would have been proud off to send Man of the Match Robinson over for his second. The final whistle sounded with a resounding Royals win and the fairy tale ending shattered. However the day ended with the majority of Derby players having a few drinks and some food and the realization that Derby City with a fledgling team formed in under one year had achieved much more than a win and a finals day. 39 players signed on and a strong training ethos from the team that had all but faded away, not to mention the unbeaten league season and final appearance. The realization was simple! Derby City had already had the fairytale ending long before the final and with moving up to the premier division next year the club is looking much healthier than it ever has.