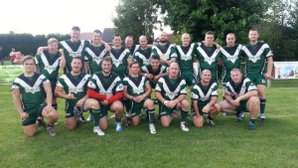 Derby moving in the right direction!

Derby moving in the right direction!

Facing the unbeaten runaway leaders Northampton Demons was always going to be hard particularly after a difficult match the week before at Telford. A back to basics training session attempted to lift the confidence and with players returning Derby mentally were prepared for this home fixture.

Northampton started the better, applying pressure immediately after a knock-on at the kick off by City, working the ball across the 20 metre line till eventually breaking poor tackles to score. Early nerves for the home side quickly diminished as with Derby’s first attack into the Northampton half, Half Back Rob Brown ghosted through after a sublime pass from his fellow pivot Joe Frobisher who dully converted the try for the extras.

Northampton whilst having the greater percentage of the ball were held in the centre of the pitch by strong tight tackling however when forced to consider other avenues they were able to penetrate the outer areas between the centre and winger to score two further converted tries. Memories of the away game was starting to come back to some players as Northampton now led 18 points to 6 after only 20 minutes.

However Derby had the remainder of the first half maintaining the ball to complete sets, resulting in a short charge over the line from the league’s top scorer Tom Pottinger to score. Eight minutes later sublime passing down the left hand side of the pitch saw Pottinger feed Full Back Lewis Thompson through a gap in the line to score his eighth of the season, converted by Frobisher. The balance of the half was evenly matched. Half time Derby City 16 Northampton Demons 54.

Changes were made by both teams at the break however Derby seemed to lose some focus and understanding as tackle restarts speeded up reducing the opportunity for setting defences firmly and tiredness started to creep in probably due to the amount of effort put in in the first half.

Frobisher dictated what ball the home side had putting in tactical kicks which pushed the Demons back when Derby had exhausted their tackles. Northampton took a grip of the game and whilst not completely running away with it, two brilliantly worked tries showed their quality and why they were in the position that they are. Along with a further unanswered tries the second half was definitely the away teams half.

The first half showed what potential Derby have with the away team taking advantage of sloppy tackling. Further training together along with improved overall fitness will see Derby advance up the league next season.

This coming week sees the last day of the league fixtures, Derby already assured a place in the play-off semi-final however results will determine whether home/away and who against. This game will be played on the 16th of August.