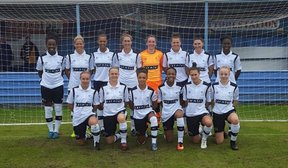 Giampalma joined Derby from Sheffield FC this summer having notched over 100 goals in a career spanning nearly 300 games for the WSL club, and she soon stamped her authority on the tie with two well taken first half goals, before Natalie Reay and Nikki Ledgester virtually killed the game off before the break. Reay added a second in the 50th minute before captain Melissa Johnson and Nicole Dale completed the scoring.

The result means that Ewe Rams have started the campaign with three wins and three clean sheets and Manager, John Bennett was understandably pleased when he spoke to the media after the game. " Today has ticked a number of boxes for the group. In terms of individuals we have been able to provide game time to players who have not started in our previous two games and the players that have come in have performed really well . In terms of the squad as a collective we have delivered another very strong performance, kept a third successive clean sheet and progressed to the next round of the cup. All things considered it's been a good afternoons work, however we put that to bed now and concentrate our thoughts on Huddersfield Town next week."

Steel City Wanderers operate a league below Derby and clearly found the step up in level a tough ask, however Bennett was full of praise for the Sheffield side. " I said to our Chairman before the game that Wanderers are a committed side who will give everything until the final whistle regardless of the score, and that pretty much summed them up. They spent most of the game on the back foot, however they never once let their heads drop and they also enjoyed some good passages of play themselves. Both their players and management team deserve a lot of praise today, they were an absolute credit to both the club and themselves and we wish them all the very best for the rest of the season "

Elsewhere the Derby's Reserves secured a superb 5-3 win away to fellow title contenders, Cardiff City, with Manager, Petter Asser delighted with the result. " I think it's fair to say that Cardiff away was probably the trickiest fixture that we could have been handed for an opener, however the players have applied themselves superbly and we have put down a very big early season marker to both ourselves and the league. The players have worked incredibly hard over the summer and today was just reward for that endeavour. "