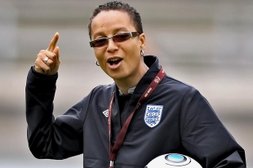 Derby County Ladies, Academy Director, Dave Cholerton has been named Runner Up for a second successive year in the ‘ Outstanding Contribution To Women’s Football ‘ category at the annual FA Women’s Awards at Wembley Stadium.

Whilst disappointed not to have landed what is regarded as one of the main awards of the night, Cholerton who has been involved with Ewe Rams for the past 14 years felt that former England Manager, Hope Powell was the right choice to walk away with it.

“ What can you say about Hope that hasn’t already been written. The first women in the world to secure a UEFA Pro Licence, 35 goals in 66 appearances as a player for her country, immediately followed with an incredible 15 year unbroken tenure as the England manager. When you chuck in managing GB at the London Olympics, an OBE and a CBE for services to football, then the moniker of Outstanding Contribution to Women’s Football is one that sits easily and well.

To be considered and put alongside someone of that ilk was honour enough for me, and i’m just delighted that Derby County have once again been recognised at national level for their development and standing within the women’s game “