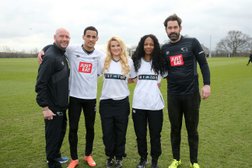 Derby County Ladies FC have been named as Runner Up in the ‘ Premier League Club Of The Year ‘ award category behind Brighton , having won it the previous year and been named as Runner up in 2014. According to club Chief Executive, Duncan Gibb, the club were happy enough with the outcome.

“ With the rewards on offer to clubs within the Women’s Super League, standards both on and off the pitch within the Premier League are improving massively year on year, as clubs within it look to secure a place at the top table. Derby as a club have in many ways changed immeasurably over the past three years and the FA have clearly recognised that, through last year’s award and runners slots either side of that.

We are consistently advised by people within both the FA and wider game, that no club outside of the WSL does more to positively promote the brand of their main club within the community, however it takes more than that to win this award. The backing and recognition that Brighton receive from the their main club along with other key partners within the city is on another level, which makes things so much easier.

That is something that we are working on, however it was no surprise that Brighton were promoted to the WSL in May and subsequently walked away with this award last week”