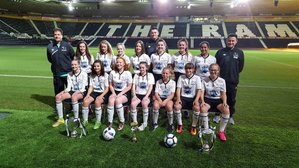 On difficult surface the leagues two unbeaten sides came head-to-head in the top of the table clash.

Having made several additions to the squad during the summer the new look U14s have made an impressive start to the season.

After an uneventful first 10 minutes all of a sudden the Ewes sprung into life. A sweeping move from box the box involving several Derby players ending up at the feet of Megan who scored from the narrowest of angles to give the Ewes a well deserved 1-0 lead.

This was the catalyst for greater things to come as the Ewes quick tempo pressing game was now in full flow and it was no surprise when on 20 minutes a super strike from Millie made 2-0 notching up her 7th goal of the season. The Ewes were now starting to enjoy themselves as Sherwoods heads visibly dropped and on the half-hour Millie made it 3-0 to the hosts with a wonderful solo effort. Several other opportunities went begging before half time and somehow the score remained 3-0 at the interval.

The interval did not disrupt the Ewes excellent display which even attracted spectators from a neighbouring pitch who appreciated very much the way the girls were now performing. With chances a many it wasn't until the 55th minute before the Ewes added to the scoreline with Millie notching up her second hat-trick of the season making it what was now an unassailable 4-0 lead. Exhibition football was now on show from Ewes and with 8 minutes left on the clock A much deserved goal from skipper Jessica made it 5-0. This is how the game finished but the stats say it all - Derby 19 shots, 11 on target, 5 goals, Sherwood 1 shot 1 shot on target 0 goals.

This was no disgrace for a hard-working Sherwood team it was just that on the day Derby were unplayable at times. Individually and collectively the Ewes were superb