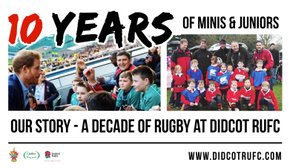 A Decade of Minis & Juniors

2020 has seen strange and difficult times, but for Didcot Rugby club it will be notable for one special thing...

...the ten year anniversary since the Minis and Junior section was started at the club.
Back in 2010, the rugby club produced a ten year strategy plan to develop rugby at Didcot by setting up a Minis rugby section. With support from the Rugby Football Union, club volunteers were developed as coaches, schools were contacted and leaflets sent out inviting five and six year olds to come and give rugby a try! On a Thursday evening in September 2010 fifteen players arrived for the first session forming the under 6 and under 7 age group teams.
Now ten years later we have teams for children aged 4 to 17, playing tag, contact and touch rugby with 200 boys and girls registered with the club and with over 40 volunteers involved in running the section.
In these ten years we have had children involved in half time activities at Premiership rugby matches, formed a guard of honour for England at Twickenham, sat with Prince Harry whilst watching the England Rugby team train and trained with England internationals Bill Beaumont and Amy Cokayne. Didcot Minis rugby were also one of the pioneering clubs involved in England Rugby’s Kids First initiative, an inclusive child centred approach to coaching rugby.
Through our RFU trained coaches we always support all our players to reach their full potential and have had individuals selected for Premiership rugby academies, County teams and England Touch rugby internationals.
From starting out at the Triangle playing fields, we moved to our new ground at Boundary Park in 2016. With floodlit rugby pitches, modern changing rooms and excellent clubhouse facilities, supporting the growth and development of rugby at Didcot.
Our players also play a central role in the Didcot community, participating in litter picks, the Christmas street fayre, remembrance parade, charity events and summer fetes.
We are always looking for new players, boys and girls, of all abilities from foundation stage to year 11 to come and have a free taster session. Training is on Sunday mornings, Sept to May at Boundary Park. Email join@didcotrufc.com for more information.
Share via
FacebookTwitter
https://www.pitchero.com/clubs
Recent news