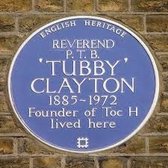 Why TOC H?
During the First World War, a soldier's club was established by the Reverend Tubby Clayton at Poperinghe in Flanders, a place where troops of all ranks could go for a brief respite from the battlefields. It was named Talbot House, as a memorial to a young lieutenant killed in action in one of the many conflicts in the previous year.

TOC H was the way the signallers pronounced the letters T H, the initials for Talbot House. TOC for T and H for House as in todays TANGO HOTEL. After the war the organisation continued using the name Toc H setting up a number of similar houses - called marks - throughout the country. In 1924 members of the Manchester mark of Toc H formed a rugby club, calling it Toc H Manchester and was situated in Victoria Park.

After moving to various sites the club arrived in Didsbury and in 1986 the name was changed to DIDSBURY TOC H to identify with the location of the clubhouse.