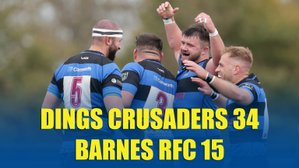 Crusaders bag a bonus-point in win over Barnes...

DINGS returned to winning ways with a solid bonus-point victory over Barnes at Shaftesbury Park. The home side had the upper hand for large parts of an entertaining contest and kept Barnes try less for over an hour.

Crusaders hit the front with a ty from skipper Steve Plummer on 12 minutes. The scrum-half converted and added a penalty 16 minutes later to open up a 10-0 lead. The visitors got off the mark with a penalty from fly-half Josh Hammett on 40 minutes to make it 10-3 at the turn.

The home side really came alive in the second-half and stretched their lead with the first of two tries from prop Liam Appleton on 46 minutes. Nine minutes later, lock Gavin Curry sold an outrageous dummy and sprinted under the uprights. Plummer added both conversions. Crusaders stretched their lead still further when wing Tom Hargan nipped in to intercept a loose pass and race in from 80 metres.

Barnes stuck to their task and got a deserved try from wing Taino Goveia, converted by Hammett. Appleton battled past several would-be tacklers for his second try, but the visitors had the final say when prop Sam Grattan dotted down in the 78th minute.