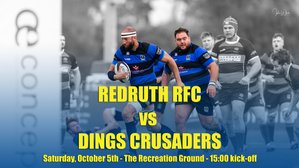 Six Changes For Dings At Redruth

Crusaders welcome the three Bears for the visit to Cornwall...

DINGS make six changes from the squad that triumphed 34-15 over Barnes last week at Shaftesbury Park, for the trip to Cornwall to face Redruth at The Rec (15:00 kick-off).

Crusaders field an all-new back three, with Tom Hargan switching from wing to full-back in the absence of Jordan Grattan (holiday). Prolific wing Ian Clark is also unavailable due to injury, and has been replaced by Bristol Bears Integrated Academy Squad member Jack Bates, who will be making his club debut.

Sam Rees is selected on the other wing and will make his first league appearance for the club since returning from a stint up north with National League One out-fit Hull Ionians. The tried-and-trusted midfield combination of Matt Smith and Marcus Brooker again link up, with the selectors also keeping faith with the half-backs and the entire front-five.

Elsewhere, James Dun – another Bristol Bear – will make his first start for the club at blind-side flanker in the absence of Anton Welling (holiday), and will link up with Tom Anderson and Jake Holcombe as the loose-forward trio. Highly regarded hooker George Kloska - the third of the three Bears, is listed among the replacements, along with Duncan Ferguson, Alex Bilton, Tom Knight and Brad Doggett.