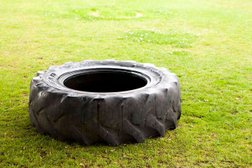 Dinnington Town FC are pleased to announce their new manager Matt Jenkinson who joins the club from Sheffield FC Under 21s development side.
Matt joins us with a wealth of non-league football coaching and managerial experience at various levels, his local football knowledge being second to none.
He is currently an FA Coaching licenced coach and working towards FA Youth Module 3 and lists a wealth of football experience under his belt having played with Mansfield Town, Queen of the South, Ilkeston Town and Stocksbridge Park Steels. Unfortunately, his playing career was cut short due to a serious cruciate knee injury.
Matt has a passion for developing young players and is keen to build continually stronger links within the junior section of the club, which will hopefully give the younger players a clear pathway to progress towards the 1st team.
Matt says "I'm hoping that we can build on the foundations already in the club and progress our own players who already have the loyalty to the club having passed through the junior section of the club and I look forward to seeing you at a game soon”
The next home game is Saturday 4th March against Phoenix FC, come and get behind us!
Share via
FacebookTwitter
https://www.pitchero.com/clubs
Recent news