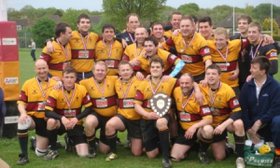 Drifters RFC was formed in 1963 by a group of disaffected Maidenhead RFC players who drank together in the Royal Oak pub in Farnham Common.

Initially they played wherever they could find a pitch, mainly away games, and used the pub as their clubhouse - hence they became known as The Drifters and used the oak tree as their emblem, which is still the case today.

A year or so later they joined forces with the then fledgling Farnham Common Sports Club, who offered them the muddy corner of the ground as a rugby pitch - a ground they still share with cricket, tennis and hockey.

They are now well established at the sports club and currently run three adult male sides, a colts side and an occasional Vice President's/Vets XV.

In 1991/92, Drifters started a minis section with just 23 members initially. That is now thriving and has just celebrated its 20th anniversary. The juniors and minis section is proud to have received the RFU Community Rugby Seal Of Approval.

Many of the players representing the 1st XV today have come through the mini and junior sections of the club, and it’s good to see them carrying The Drifters ethos forward for future generations.

Funding from Sport England and Rugby Football Foundation in 2006 allowed us to complete a significant redevelopment, ensuring that our sports and social facilities remain first class.

In 1999/00, Drifters achieved their highest ever league position - a fifth place finish in Southern Counties North.

In 2013, Drifters were awarded the prestigious RFU Accredited Club award.