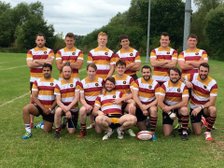 Drifters made their return to the annual Slough 7s tournament after an absence of several years and finished a Plate finalists after a good day of rugby.

Drifts dominated Pool 2 in the Beer Competition, completing an unbeaten run of three wins from three to win the group.

First up, Drifts brushed aside GFC (Phoenix RFC) 38-0 before seeing off TrouserSnakes (Maidenhead RFC) with a huge 45-0 scoreline! To not concede a try in two straight games of Sevens is very impressive.

It then came down to a winner takes all clash against Green Army, who had also won their opening two games. A nail-biting match saw Drifts cling on by one point to win 15-14 and top the Pool.

This set up a Cup semi-final against High Wycombe, but unfortunately the Bucks side had a little too much and won the game 21-10.

This saw Drifts drop into the Plate Final where they took on McDermott. Some very tired legs and bodies meant Drifts fell to a 19-7 defeat to finish as runners-up. However, the lads can be very proud of their efforts, particularly in the Pool stage.

A great way to start pre-season!