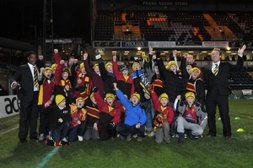 The Wasps Community Coaching Team came to the club to coach players from U12 & U11 and U8 & U7s age groups before we all then headed off to the Adams Park Stadium for the match against Llanelli Scarlets.

Concentrating on the follow up from 'the breakdown' in tackles, rucks and mauls the boys were kept constantly on the go for two hours of intensive training. Not a whinge or murmur heard throughout must mean that Russell Bolton and his team performed magnificently - it's a shame that the same couldn't be said for the Wasps match later!

To be greeted at the stadium by Wasps Captain and France player, Serge Betsen, was the icing on the cake.