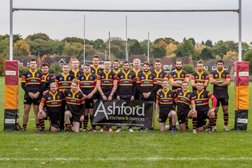 After a very close fought fixture between Drifters and Buckingham earlier on in the season, which saw Buckingham scrape through as victors winning 95-12. The visitors were clearly nervous at the prospect of seeing Drifts for a second time, scoring the opening try straight from kick off!

Drifts seem to compose themselves and tighten up in defence for a good period of the 1st half. However, Buckingham’s attacking flair proved too much as the tries continued to come.

Much like the previous meeting, once the floodgates opened, there was little Drifts could do to prevent further onslaught from the well drilled Buckingham resulting in a 40 point deficit at half time.

The 2nd half started very much how the 1st half finished with Buckingham continuing their dominance scoring a few more tries in the process.

With 10mins left on the clock, the beer fueled VP’s from both clubs, who had been lunching a few hours prior, did their best to cheer on their respected teams. The lion hearted Drifters began to work a few phases and started to make some well deserved yards only to be turned over moments later, just shy of Buckingham’s line

The referee blew the final whistle with the scoreboard reading 0-92 to the visiting side. But as with every game this season, Drifts continued to smile and prove what a great club this is!

The smiles continued into the clubhouse too, with players from both clubs under going a strict kit check. After several halves of Guinness being consumed via either a shoe or a sock. Drifters have continued their reign at the top of the drinking league! And I feel Buckingham won’t be wearing white socks at Drifters in a hurry!

Congratulations to Buckingham who were worthy winners on the pitch and who will no doubt be promoted come the end of the season!

Drifters should be extremely proud about the heart in which they’ve shown this season. It’s been tough, but we’ve proven to a lot of clubs in our league that we have unbelievable spirit!!