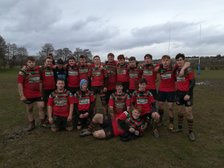 Dronfield colts do the Double

“Colts Silver lining to the season “

Dronfield travelled to local rivals Tupton , with a much changed side from the previous encounter, with the return of the charismatic John Lamb who would captain the team at number 8.Tupton would be a much tougher opponent than previous matches, as they fielded a full team and subs.

Dronfield kicked off down the slope, and where soon putting the Tupton attack under great pressure. Excellent defensive work by dronfields Matt Silver and Harry Burch, soon had tupton giving away a penalty, which was quickly taken by scrum half Harry Hibberd, who set up Kewell Marsden to crash through the Tupton defence to score out wide, for a converted try. Dronfields impressive defence soon had tupton spilling the ball and from the resulting, turn over dronfield attacked through the forwards with some good ball carriers by Tom Bowen and John lamb. Then from close range scrum half Harry Hibberd dived over to score and convert his own try.

Tupton then began to attack more effectively through their forward pick & go game. Then from a quickly taken tap penalty, tupton where able to crash over for a converted try. Tupton Pack where dominating the scrums, and from a scrum near the line their number 8 picked up and crashed over to score just before half time.

Dronfield made several changes at half time, Iwan Hutchings coming on at 10 and Ewan Farquhar moving to 9. Marcus Glossop came on as flanker and Oli Slater on the wing. Dronfield soon had their quicker backs on the attack with Josh Duce and Nye Lewis linking well in the centres. The combination of the two Ewans was making dronfields attack quicker and sharper. This gave the chance for Nye Lewis to dance through the Tupton defence to score his first of two tries. Dronfield now began to dominate the set piece, with Matt Silvers was outstanding in the line outs, securing dronields and stealing several of tuptons. Dronfield scrum began to shove the much larger Tupton pack backwards, with the front row of Tom Bowen, Todd Fletcher and Harry Lomas providing a real solid platform.

Iwan Hutchings began to control the match with his kicking game. Iwan set up Nye Lewis for his second try when from his kick and chase from the half way line by Iwan , Nye was able to out pace the tupton cover defence and score next to the post, which Iwan converted. Dronfield scored again when some good of loading skills by John Lamb gave his back-row partner Marcus Glossop a try. Dronfield began to open up their attacks and break the gain line on numerous occasions with full back Sam Hallam and winger Oli slater combing well. Dronfield scored the last and the best try of the game, which involved both forwards and backs combing well, and moved from one side of the pitch to the other. And resulted in Josh Duce crashing over for a try. Iwen Hutchings converted giving him a 100% conversion record for the game.

This was a much harder game than the score suggests, but was an entertaining game, with the usual fiery exchanges at times. Dronfield managed to maintain their discipline and run out as winner. This proved to be the final Colts game of the season, and as such reflected their hard work both at training and on the pitch.

Dronfields man of the match: was award for his outstanding tackling his line out skills and for his 110% work rate for his team goes to; Matt Silvers.