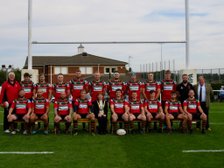 A big day for Dronfield as they launched their historic 50th season. Sporting their new kit the team was presented to guests of honour, Dronfield Town Mayor Lillian Deighton, NLD President Steve Alford and Derbyshire RFU President Roger Lucas. Our thanks to Market Rasen who agreed to play in their change strip to avoid any possibility of a color clash.

Dronfield started slowly and Market Rasen had the first chance to score from a penalty for interference off the ball which luckily sailed wide. The first score for the home team came from broken play with winger Jack Longden, skillfully picking up a loose ball at pace. The ball was then flashed quickly away by Jake Steade to centre AJ Hills who break through and scored the try. 7-0

On 19 minutes a very flat pass from fly half Matt Hale put Jack in for a sprint down the wing and he scored in the corner. Followed by a super conversion by scrum half Jake Steade. 14-0

On 26 minutes MR struck back after spreading the ball well to find an overlap. 14-7

Dronfield were awarded a penalty just outside the 22 which was duly converted by Jake Steade. 17-7

On 34 minutes there was a Yellow Card for Chris Hale after cumulative infringements by the Number 8 but the Dronfield defence stood firm and on 36 minutes, Full Back Luke Cocking scored, taking a loose ball over the line after a loose ball was picked up by Hugo Ross who converted the 2 on 1 in front of him and sent his Number 15 over in the corner. 22-7

Last year, Dronfield scored alot of tries from counter attacking into open spaces and this week was no different. Reika Mahmid made good metres after a clearence kick and Sam Selwood came in at scrum half to shift the ball quickly to Captain Matt Hale. He put in a kick over the top and the ball bounced right into the hands of a grateful James Marshall who ran to the line leaving a rather unlucky Rasen defender behind him pondering the cruel bounce. 27-7

Last season Dronfield actually ended the season playing their best rugby up the slope but did not start this half well conceding 2 early tries in the second half to bring the score to 27-17.

On 56 minutes Dronfield won a penalty and kicked into the corner. Hooker Paul Joyce found Hugo Ross at the Lineout and then rejoined it at the tail of the maul as the pack worked well together to get him over the line. 32-17

Next try went to MR after missed tackles. 32-24

On 66 minutes Dronfield relieved a period of pressure with a clearance up field and a superb chase by Jack Longden put the full back under pressure and with the assistance of sub Will Backhouse he was ushered into touch. As the ball made its way left, the Market Rasen Winger shot out of the line in an offside position to put pressure on Matt Hale but his quick hands got the ball away to AJ Hills who cut back into the vacated space in between the defenders and sped to the line from 10 metres out. Jake made a good conversion to give Dronfield a two-try cushion and the score stayed that way until the final whistle.

A much better start than last season, with a bonus point win, and Dronfield will be keen to keep the momentum going next week with a cup game away at Stafford.